Why Did This Watch Fetch Almost $4 Million Dollars in an Auction?

Although the total monies collected for the 5th  Only Watch Auction 2013, held by Antiquorim Auctioneers in Monaco to raise funds for medical research into Duchenne Muscular Dystrophy, was lower than expected, it did break quite an astounding record.  A single watch fetched  €2,950,000,  more than half the total  €5,066,000 collected for all 33 watches at the auction.  This one watch saved the day. 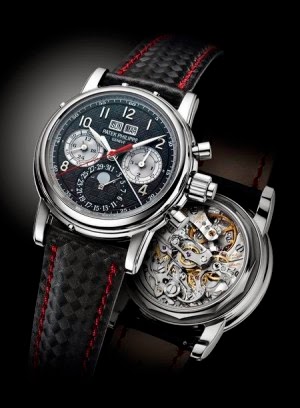 What watch? Why is it worth so much?

The Watch in question is the  Patek Philippe Ref. 5004T from the Grand Complications collection. The only timepiece Patek Philippe has ever made in titanium.  The watch was estimated at a mere €400,000 to €600,000 and sold for 5 times that amount.

Aside from the Patek Philippe Ref. 5004T's  impeccable perfection, its perfectly precise Caliber CHR 27-70 Q based on a “Nouvelle Lémania” movement crafted exclusively for Patek Phillipe and reworked in the companies workshop and the fact that it has a split second mechanism as well as a perpetual calender (the most intricate and complicated of all complications), this watch brings so much more to the auction block than its physical presence. First and foremost, the watch is manufactured by Patek Phillipe, no doubt one of the highest regarded watch companies in the world.  Patek Phillipe is an old reputable company formed in 1851.  Patek Phillipe has never wavered on quality or commitment to perfection. Thus  no matter the decade, a Patek Phillipe watch fetches exceedingly high prices at auction. 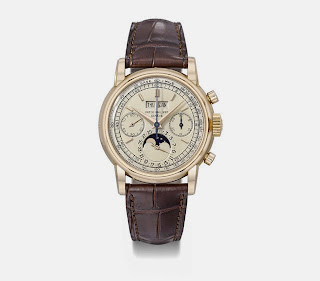 For example in 2008, a Patek Philippe Ref. 1526 circa 1949 sold a perpetual calendar stainless steel watch for € 2,598,455 at a Christies Auction.  The highest price received at auction for a stainless steel watch. In 2011 The Sotheby's Geneva Sale of Important Watches  an extremely rare ,circa 1960, Patek Phillipe Chronograph sold for $815,637. At the Only Watch Auction 2011, the highest bid went to the Patek Phillipe Reference 3939A, which sold for 1.4 Million euro.   In 2004, a Patek Phillipe Calibre 89 sold at a Sotheby's Geneva Auction for over 6.6 million Swiss francs. A 1957  pink-gold Patek Philippe with a perpetual calender, only 6 of these known to exist, just sold for $2.2 million at a Christie's International auction in Geneva.(see inset) I could go on and on, but I am sure, dear reader, you get the picture.

There is no doubt that this watch has an unbelievable resale value, and being only one of its kind ,could fetch astounding prices in the years to come.

A Perpetual Calander is one of the most difficult complications to master; requires the most components and is the most time consuming to craft. This complication is not as eye catching as a tourbillon or as playful as a sonnerie or as insistent as a minute repeater, but it is a master of mechanical manipulation. And the master of mechanical manipulation is undoubtedly Patek Phillipe.
The  Patek Philippe Ref. 5004T has a subtle sense of relaxed playfulness underscored by a core of undisputed power of perfection.
The astronomical price of the watch, of course, was aided  by a furious bidding war between collectors. After all this is a unique Patek Phillipe timepiece available for  public auction.   Like the watch, the opportunity is quite rare indeed.