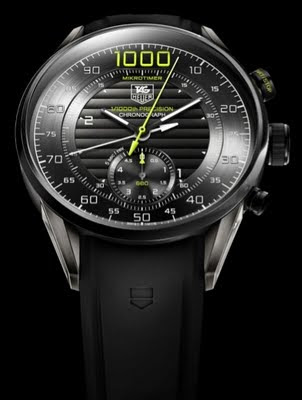 The Mikrometer Flying 1000 Concept Chronograph, unveiled at BaselWorld 2011, is recognized for being the world's first mechanical chronograph concept timepiece to track time to 1/1000th of a second -125 times more accurate than any other chronograph timekeeper. This incredible precision is enabled by a chronograph movement that beats at 3,600,000 vibrations per hour (500 hertz). The Mikrotimer Flying 1000 Concept Chronograph utilizes the same concept as the TAG Heuer Carrera Mikrograph 1/100 second Chronograph - which I blogged about in much detail back in January 2011

The 45mm case is crafted from titanium carbide, which is extremely hard (9-9.5 mohs), strong and scratch resistant ceramic material. In addition, the watch case is extremely resistant to corrosion and has a melting point of 3,100C. This material is mostly used in drill bits and other industrial tools, and is still very new to the watch industry. The sapphire crystal is treated with an anti-reflective coating bringing any reflection from the sun down to zero. The open case back is affixed with sapphire crystal so one can view the Tag Heuer in house movement beating at two very different rates - the Chronograph beating at a whopping 3,600,000 vph and the watch beating at 28,000 vph. The watch has a 42 hour power and a water resistance of 100 meters.

Tag Heuer is constantly striving for better precision, the ability to find winners in neck to neck motor races. Races which in the past would have been a tie, but are now just fractions of a second apart. Tag Heuer's dedication to motor racing has fueled its determination to eradicate confusion at the finish line and pin point a winner at the smallest of margins.


The Mikrotimer Flying 1000 Concept Chronograph, will soon be concept no more, at the end of this year, this remarkable timepiece will be commercialized.
Posted by Vicky Van Halem at 11:09 AM