With the weather the way its been on my side of the US, I have taken a new interest in the tides. In the passed, pre- Hurricane Sandy I should say,  I dismissed this oceanic encroachment as a fisherman's concern, but now with a Nor'easter baring down on us and "Coastel Flood Warnings" in effect, my entire view of tides has changed.  I am not only aware of the tides, I am preoccupied by them.  Obsessed if you will. Who can blame me.  My house is still in the dark, thanks to a water logged and likely ruined substation.  I shouldn't complain. A couple blocks from my house, the sidewalk is punctuated by heaped piles of sodden mattresses, salted electronics, molding carpets and household brick and brack.  It's almost as if the houses themselves have become awful queasy and threw up the colorful contents.
My tidal obsession together with my "where to find the shortest gas line" obsession, demands that I find a timepiece which tells the tides.
"What about a cellphone app?" , you may ask with helpful ignorance.
"Ha! Ha!" I laugh in near hysteria - ," cellphones don't work in my watery pitch dark neighborhood!" 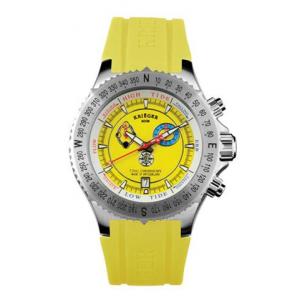 So if you've managed to get through my long winded introduction blatantly brimming with self pity, you will find that I happened upon a brand of watches actually created by a guy called Ira Krieger who in 1987 created the very first Tidal Chronometer.  His wristwatch was clever enough to predict high and low tides.  UREKA!! Ira Krieger was effected by high tides too. No his power did not go out nor did his house flood, but it was aggravation non the less.  As a result of an unexpected high tide, his family boat could not fit under a bridge and thus could not return to the marina. So that's when his tidal obsession began.  Ira Krieger did not sit and mope about the tides, but rather set about a way to track them. Ira Krieger in listed the help of his step son, now president of Miami-based Krieger Watch Company, who suggested a watch displaying when they could leave or return  to the marina. With the help of a Swiss Watch Company, they created the Krieger Tidal Chronometer.

WARNING Off topic here - reminds me of that Chinese King Su Song - who in the time of the dragon - oh about 1000 years ago, came to a meeting a full month early. He was peeved about waiting around for a month (who wouldn't be) and commissioned the building of "Su Song Heavenly Clock Tower" 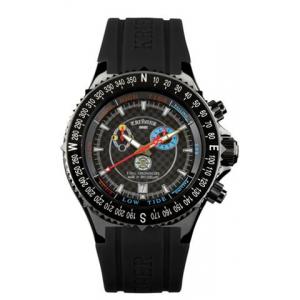 Both Su Song and Ira Krieger dealt with miscalculations of facotrs by devising a way to track them.

Although Krieger has a large selection of  Tidal Wave Watches, I have chosen the models that are highly resilient and not prone to water damage. The Swiss Quartz Movement watch is constructed either  from an indestructible special construction matte  and high polish 44mm case or Steel with PVD processing (left). A Carbon Fiber Solar Powered Bezel is engraved with a solar compass.

To commemorate 20 years of tidal prediction, Krieger unveiled the Tidal Wave  Chronoscope, which accurately predicts the hours to the next high and low tide. Tiny microscopic gears are utilized to ensure maximum precision.   The large tide indicator baring a signature Krieger counter balance points to the level of tide. A handy sub dial also indicates the tidal range, neap and spring tides. The tides and moon phase can be set via screw in push buttons.  Of course the tide is influenced by the  the moon so a sub dial moon phase is in order.  The Krieger Tidal Wave is so in tune with the world at sea that its water resistance is measured in miles. The Tidal Wave is capable of  almost half a mile of water resistance or 2640 feet. The dial is protected by a double dome sapphire crystal coated with an anti-reflective treatment.
The 20mm Rubber straps fashioned in a unique divers cut are available in a variety of colors adding an individual touch to the watch.  Bracelets for the Tidal Wave Chronoscope are available in Stainless Steel polished or Matte.  The dial is available in a variety of colors too, allowing one to mix and match to hearts content.