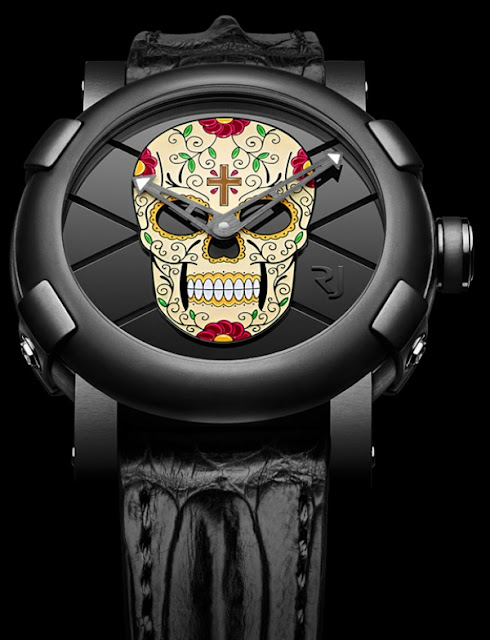 DIA DE LOS MUERTOS Romain Jerome watch reveals a strangely "festive" timepiece for the a holiday revered in Mexico "The Day of The Dead"  The busy festive skull plastered on a signature Titanic DNA Romain Jerome case and dial captures the celebratory festivities honoring the departed. The skull is actually a representation of the traditional Mexican decorations known as "calaveras" such as wooden masks or skulls made of sugar associated with this day.  The tradition is of ancient beginnings dating back 3000 years to the Aztecs.  Back then, until the Spaniards came town 500 years ago - give or take, the day was celebrated on the 9th month of the Aztec Solar Calender presided over by goddess Mictecacihuatl or "Lady of the Dead".  She died at birth, but her legacy lives on.
The Spaniards not liking this so called Pagan ritual, but unable to stymy this tradition moved the date to November 1st and 2nd so it coincided with "All Saints Day" and "All Souls Day".

Unlike Halloween which evokes ghouls, ghosts and other ghastly depictions, DIA DE LOS MUERTOS honor the dead in celebration.  Brightly colored skull masks, skull confections and skull puppets decorate the day, much of which is spent at the graveside of loved ones. The graves are often decorated with marigold flowers and candles. Some build alters in their home for offering love and remembrance to the departed.

With so many skull motifs out there - think of Bell & Ross skull watch representing the Second World War Airborne paratroopers (Death From Above) or Corum's obsession with the creepier side of skulls - it is necessary to clearly distinguish the motif of skull representation.  I think Romain Jerome has done an exemplary job in this regard.  The brightly colored skull skillfully hand-crafted in colorful applique with champlevé decoration and cold enameled in seven symbolic colors, is clearly the skull depiction of "DIA DE LOS MUERTOS" or "Day of the Dead".  The seven skull colors signify the seven stages a departed soul must travel before finding eternal peace. The 46mm black PVD coated steel case encases an in-house Caliber RJ001 Mechanical self-winding movement.  Beneath the skull on the  mirror polished dial,  Romain Jerome has placed its signature X shape engraving  extending to the four black ceramic "paws" placed on the black ceramic bezel on either side of the lugs.  Below the 3 'o'clock position resides a polished Romain Jerome logo.  The  blackness of the dial, case and strap serve as an intense backdrop to the striking brightness of the skull.

Black Satin brushed skeletonized hands are coated with a C1 Superluminova "blue emission" for read out in the dark.
A "Día de los Muertos" medallion  is engraved on the case back.  The watch is affixed to the wrist with a black hornback alligator strap
Two models, one with a cross and one without, will be available in a limited edition of 25 pieces per model.