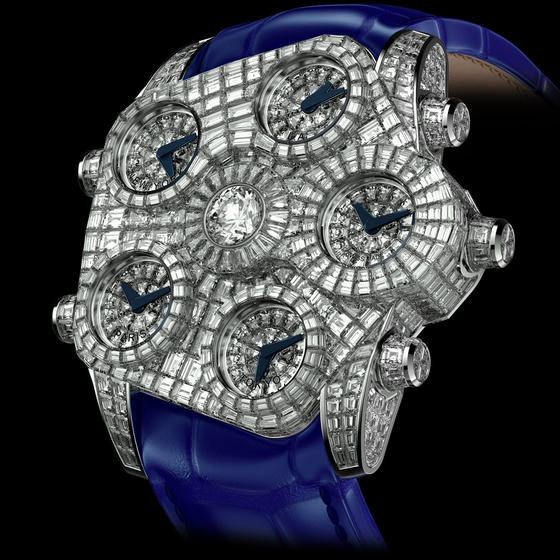 Jacob the Jeweler smothers his G5 design in a myriad of  baguette diamonds aptly named the "Grand Baguette" .  The effect is dazzling display of overall perfection achieved by precisely matched stones for clarity, color and carat. The gem setting is practically invisible accentuating the intriguing shape of the case rather than smothering it.

The original design of five sided case signature of the G5 Collection is the brain child of Jacques Fournier CEO of Horology Design Limited.  Jacques Fournier worked closely with the brand owner collaborating on every aspect of the design process. Jacques Fournier brings vague ideas to solid realization of form. With the aid of 3D visuals and animation; precise technical drawings, Jacques Fournier turns the guess work of new designs into educated calculations.  The five sided case was also incorporated in Jacob & Co. "The Ghost" - a multi-timezone GPS digital timepiece, which made its debut back in 2012.


As to how many diamonds make up the "Grand Baguette?  360 baguette diamonds on the case, 120 on the dial and a brilliant cut diamond at its center.  The five crowns are non forgotten and glitter with 3.5 baguette carat diamonds. All in all ,except for the crowns, one can count 761 diamonds.

As to the price - well its up there no doubt and only revealed to the earnest of buyers.  A mere 6 pieces will be available throughout the globe and no doubt will become a heirloom for generations.
Posted by Vicky Van Halem at 11:54 AM