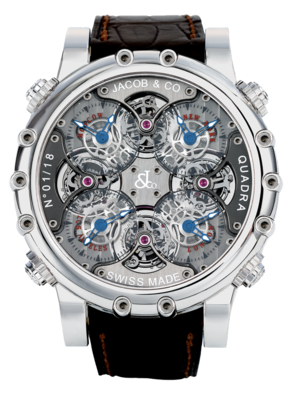 A tourbillon is not officially a complication, but rather an addition to the mechanics of a watch. A very coveted addition, which has gained popularity in leaps and bounds.  A tourbillon was created to eradicate the effects of gravity on the escapement - balance wheel, hairspring and a pocket watch.  A company which has successfully mastered a tourbillon gains credibility in watch circles. A Watch incorporating four tourbillons well that  not to mention four tourbillon in a single watch. 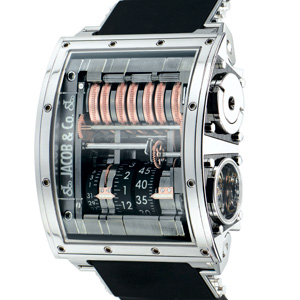 Living in New York has quite a few perks, one of which is being close to a vast amount of Luxury Watch Boutiques and Flagship stores. On a number of occasions, I have visited Jacob & Co. Store just across from Tourneau and right round the corner from Antiquorium. After ogling at the highly publicized Jacob & Co. Quentin - a timepiece with a 31 day power reserve (first ever) enabled via  seven horizontally arranged manually wound mainspring barrels and a master in torque - factor ensuring timekeeping constancy over the 31 days, I entered the Jacob & Co. 57th Street flagship boutique.

The store is a sleek display of Jacob & Co. bejeweled timepieces so often seen around the wrists of celebs; however as glamorous as they are, the display case at the far end of the store beckoned me.  Within the case, I was captivated by the fresh and utterly new adventurous designs.  The intriguing five sided case of the Grand 5 Collection  goes beyond the comfort zone of proportion and balance, and enters a bold uncharted realm of design...which works.

The G5 Collection is the brain child of Jacques Fournier CEO of Horology Design Limited.  Jacques Fournier worked closely with the brand owner collaborating on every aspect of the design process. Jacques Fournier brings vague ideas to solid realization of form. With the aid of 3D visuals and animation; precise technical drawings, Jacques Fournier turns the guess work of new designs into educated calculations. 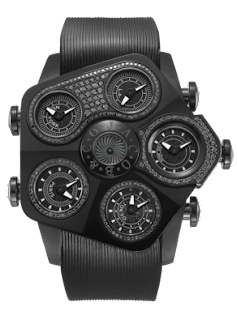 Jacob & Co. founder Jacob Arabov and one of my favorite designers and appointed COO of Jacob & Co. Yvan Arpa of Artya and Romain Jerome fame  are adding renewed vigor to the company.
Both great watchmakers are  stretching the limits of watchmaking, a prime example the Napolean Quadro Tourbillon.  A skeletonized timepiece incorporating four 60 second tourbillon escapement servicing four separate timezones.  The watch is powered by an exclusive Jacob & Co Caliber 8082  mechanical, manual-wind movement.

While steadfastly holding on to watchmaking tradition, Jacob & Co. is setting sites on the future by introducing its very first digital watch- The Ghost -  complete with five time zones, changing  LED lights and Jacob & Co signature five sided case  -Click here for a complete in depth review of "The Ghost"

Email ThisBlogThis!Share to TwitterShare to FacebookShare to Pinterest
Labels: Jacob and Co.