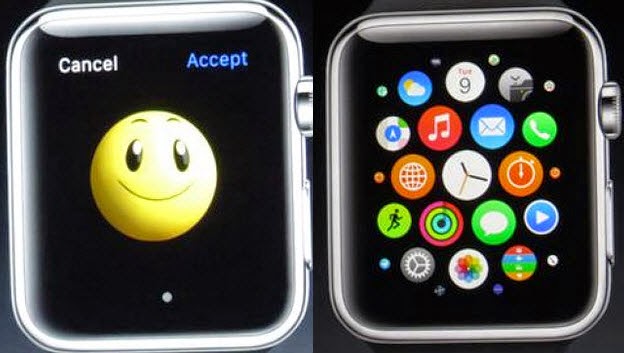 Apple just announced the release of a WATCH which is highly adapted to the individualized needs of the wearer especially in terms of health and fitness. Apple is very clear to emphasize that this watch is NOT merely a shrunken iPhone stuck onto a strap and worn around the wrist. It is a highly sensitive device capable of catering to a whole list of wearers needs. 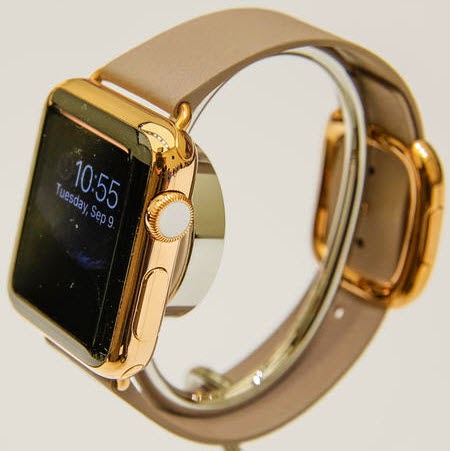 The interface that powers this watch is unlike anything ever created.  The watch, which can be adjusted to display an analog dial,  comes equipped with a digital crown, which is as far removed from the traditional mechanical crown. A traditional crown is used to wind the mainspring in manual watches as well as adjust the calender, time etc in any other mechanical watches.  This Apple Crown is actually a dial which allows one to quickly hone in on apps without effecting the current dial display. Although the watch just made face, left-handed critiques are complaining the crown is not very susceptible to them. Oh Well! However, on further research its seems if one flips the watch and whear it on your right hand, the watch automatically knows it is servicing a  lefty or any other "right hand watch wearer".

One little tap displays ones friend list and the message capability.
The touchscreen can actually sense force, which allows it to differentiate between a tap and a press.
Of course the watch has a retina display.
The watch also has a haptic feedback engine which can pick up ones heart beat. Haptics is .as per the trusty Wikipedia, " is a tactile feedback technology, which recreates the sense of touch by applying forces, vibrations or motions to the user. I wonder if Siri, who has conveniently been squeezed into the watch, will frantically call the medics if ones heart races to dangerous levels. Also there is an accelerometer, which gives you notifications when raising your wrist.  This might be most helpful during road rage or the like, "Calm Down! Take Control! - if it actually works that way. 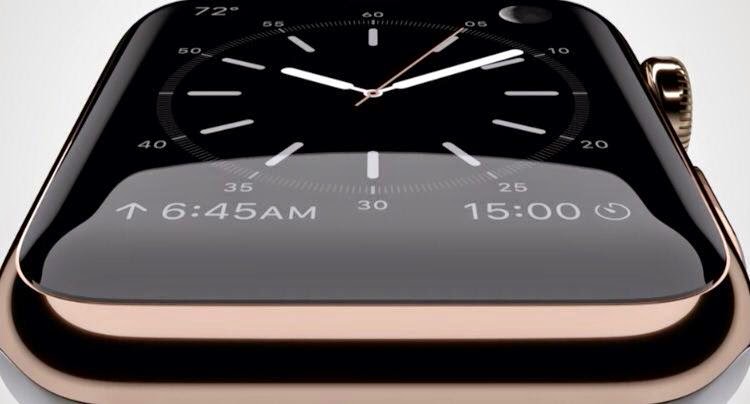 The watch is available in two sizes as well as two different models.  A Sports Model and a fancier model.  Seriously I have a hard time describing this watch using the same terms as a mechanical watch. For although this item may look like a watch, it is not.  It still is, in my eyes, a miniature computer on the wrist. It's along the same lines as calling Google glasses, glasses for reading.
The Sports model is lightweight and durable, whereas the fancier model, which is called the "Apple Watch
Edition" is manufactured (I was going to say crafted, but did not) from 18k gold, which must be some sort of alloy as it is twice as hard as standard gold.
To describe the watch face is a bit difficult as it can be greatly personalized to preference. however, I have displayed above a smiley face as well as the Home screen.
I must say as for modern technology this is great, but truth be told in a generation where babies tap on National Geographic photos to try and get the images to move, a company has to be quite innovative to impress.  Am I impressed with the capabilities of the watch?  Sure its cool.  I mean you can play music stored from devices around you; find the time in faraway place. 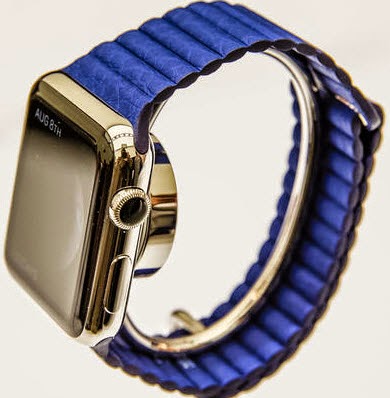 As for the tiny typing issues, the Watch allows for a Tap or a cute Emoji response to a variety of instances.  You can also dictate into the watch instead of typing.

The watch also features an upgraded location feature, which vibrates when you must make a turn.  Of course there is tons of apps.  I can think up a few myself such as improving a golf swing stance.  The fitness side of the watch is great for athletic performance as well as calorie intake and sitting time vs standing. It probably will have an app to aid in sleeping habits etc.

I hope the Watch crystal is somewhat shatter resistant, since it is supposed to accompany one on strenuous exercises, which can mean the watch may take a knock or two. It probably is scratch resistant sapphire crystal.


It is important to note that this watch is a kind of accessory to the iPhone and can only work in conjunction with the iPhone, so if you want an Apple Watch and don't have an iPhone, you must get an iPhone.
As for the power reserve of the watch,  well it does come with a charger, which is plugged into the back of the watch.
Ok! Now I know you really really want the watch; however, you will have to wait until early 2015.

Cook:"It will redefine what people expect from a watch," 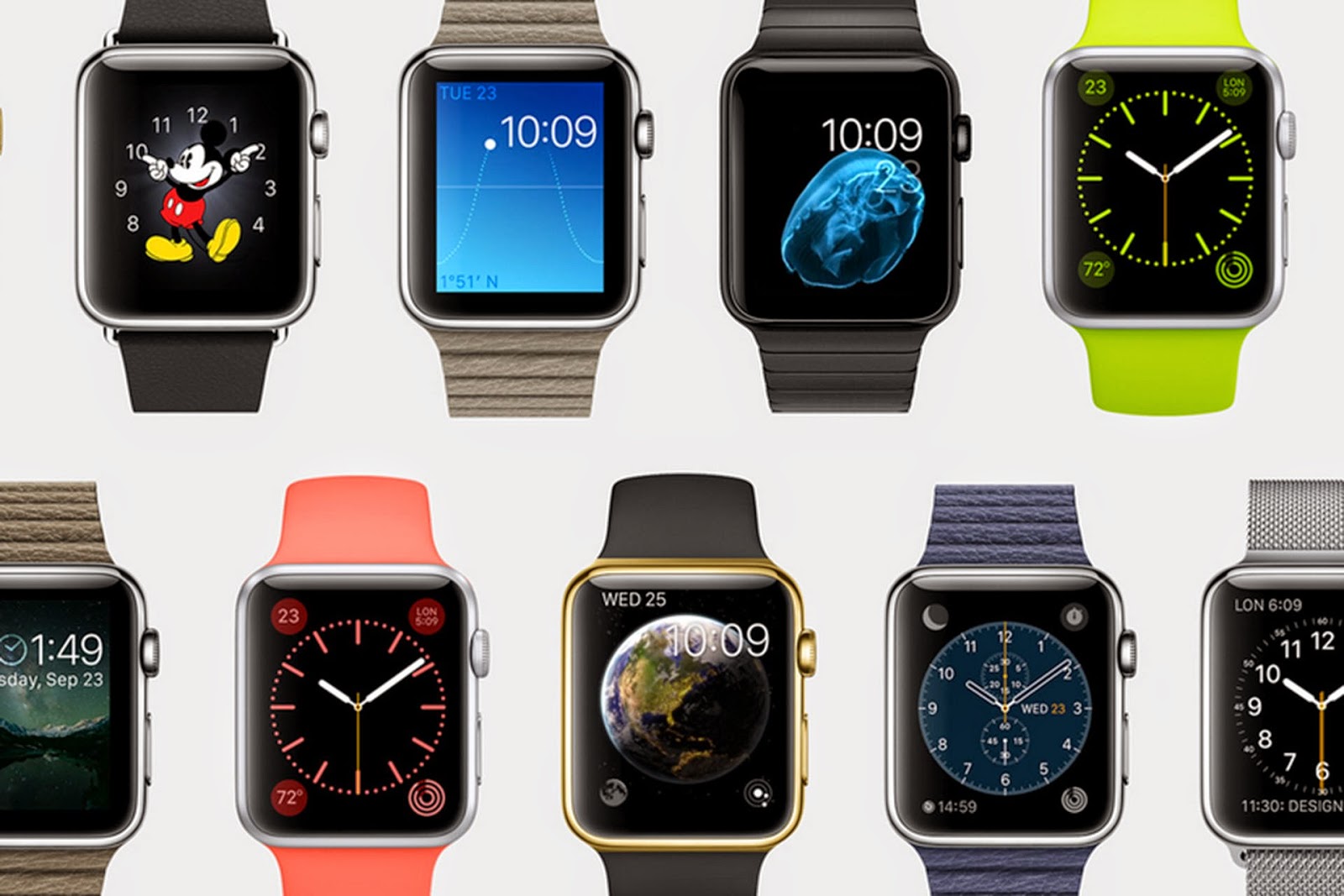 Should the Swiss Watch Industry fear another Quartz Crisis?  Certainly Not.  Why? Well there are a few reasons.
1) People in the market to purchase a Vacheron Constantin are not the same buyers as those running to purchase an Apple Watch.  It's like comparing a Rolls Royce to a bicycle.
2) This is not a new concept.  It is just an improvement on an already existing product. The Smart Watch.
3) The main consumer of the Watch will be people who use their cellphones to tell the time, and thus purchase the Watch as a cute accessory.
4) Mid to High End timepieces are often  worn as jewelry and most often not used to tell the time.
5) The battery life is a major issue.  People who do not have constant access to power outlets and need to know the time will not forgo there watch for an Apple Watch.
6) An Apple Watch does not and will never have the same status symbol and image upgrade as a High End timepiece.  After a while the Apple Watch will not be a conversation starter, but a conversation stopper as alerts and beeps will require immediate attention.
7) Once the watch battery runs out, one is going to look a bit silly wearing a blank screen on the wrist - no matter how much gold frames its blank face.
8) A High End Watches is an investment - An Apple Watch is not, especially a Generation One Apple Watch or whatever Apple has called the firstborn of its iPod offspring.

Jean-Claude Biver founder of Hublot told German media in regard to the new Apple Watch:


"This watch has no sex appeal. It's too feminine and looks too much like the smart-watches already on the market," Biver said in an interview with daily Die Welt.
"To be totally honest, it looks like it was designed by a student in their first trimester,"

Suffice to say he was not impressed.

My humble thoughts:
Low end quartz watches will be the most effected by the Apple Watch and thus I do see a greater rift occurring between the Low Range/ Mid Range Quartz Watches to High End Watches.
Unfortunately as technology gets better and better, our dependence on technical gadgets  running our day to day lives increases dramatically. A high end watch depends on no one else besides the watch wearer.   It does not rely on a power grid, electrical outlet or power cord.  It relies on the power of a person to wind the mainspring which sets the gears in motion.  An intimate circle of power between you and your time machine. No matter how advanced technology gets, there is absolutely no replacement for that.