A Company Founded from The Great Kipton Train Wreck of 1891 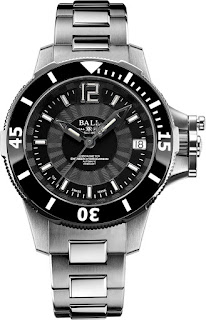 The Ball Watch Company is dedicated to timekeeping precision. Precision not just founded on its dedication to excellent timekeeping, but founded to save lives.

The US in the mid 1800's saw an exorbitant growth of industry overtaking many European nations in the manufacturing of goods.
Coal, iron ore, copper, lead, steel, timber and oil industries burgeoned.
Hard times in Europe - like the Irish Potato Famine - and promise of a golden future had huge amount of immigrants rushing to the shores of the America.
This was a time of extreme innovation and creativity.  From 1860 to 1890 an astounding 440,000 patents were submitted to the US Government.
The biggest expansion was the railroad system as Congress granted land to lay tracks bringing people and goods from coast to coast.  Miles upon miles of railroad tracks were laid snaking across the country from end to end. Tiny hamlets became small towns as coal mines and steel foundries employed thousands of people. (Now  these places in States like Pennsylvania and Ohio are a desolate display of a teeming past).  Passenger trains limped from tiny station to station while fast mail trains hurtled across the country in a frantic race against time sending  plumes of acrid black smoke high into cloudless skies. Freight trains piled with coal lumbered on for miles.  Engineering advancements increased the power and speed of the locomotives which easily reaching speeds up to 50 and 60 mph.   By the end of the 1800's, the US had five transcontinental rail lines.

Accurate scheduling was crucial and timing errors were fatal.   This fact was made all the more pertinent  at the site of  "THE GREAT KIPTON TRAIN WRECK OF 1891 where nine people (six postal workers, two engineers, a fireman)  tragically lost their lives. 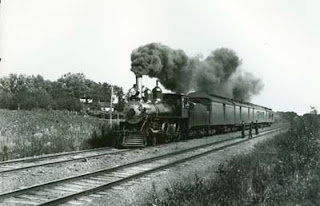 On April 19th, 1891 a fast mail train No. 14  bound east barreled without slowing past the Lake Shore Railroad at Kipton Station and slammed into the accommodation train, the No.21 Toledo Express, as the No. 21 was pulling into the siding in order to let the fast mail train pass. A line of freight cars had partially obstructed the Fast Mail Train's view and by the time the Train's Engineer applied the air breaks, it was too late. The violent wreck turned both engines, three mail cars and one baggage car into a smoldering pile of debris.   It was a custom for the Toledo Express to pull to the siding and let the fast mail train pass, but this time the Toledo Express was four minutes late, with disastrous results.

Rescuers rushing to assist the victims of the wreck found the mangled body of Engineer,Charles Topiff. His charred hands still clinging to the throttle. The Postal Clerks sorting mail in  cages had no chance of escape and died trapped. 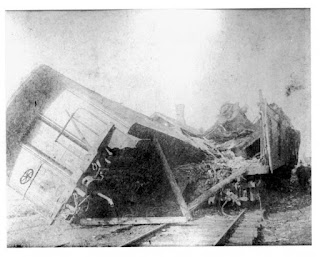 Why was the Toledo Express four minutes late? The engineer's pocket watch stopped for four minutes making him believe he had seven minutes before reaching the  Kipton Station when in fact he had only three.  The Conductor believed the engineers watch was accurate.  From the time the train left Elyria until the train reached Kipton, he did not consult his own watch.  For if he had, he would have noticed a discrepancy of four minutes.

After some investigation, The General Superintendent of Lakeshore lines realized a proper timekeeping system was crucial and appointed Webb C. Ball, an Ohio native and the first jeweler to use time signals after the 1883 Standard Time was adopted,  as Chief Inspector of the Lines. He was appointed to determine Time and Watch Conditions throughout the Lakeshore Lines.  Every two weeks Ball had all the watches of the railroad workers checked by approved watchmakers. This was done to ensure no watch varied more than 30 seconds. Thus the watches adhered within thirty seconds of Standard Time, and were the most accurate timepieces of the day.    Webb C. Ball implemented an inspection system which covered 75% of the railroad lines amounting to 175,000 miles of railroad even crossing the border into Canada and Mexico.

Email ThisBlogThis!Share to TwitterShare to FacebookShare to Pinterest
Labels: Ball