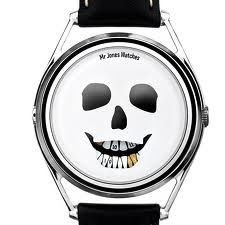 Mr Jones wants to make the point of "Carpe Diem" or Seize the Day".  Lighten up we are only around for a brief moment in time. Mr Jones has a large selection of very intriguing and unusual timepieces.
Posted by Vicky Van Halem at 4:44 PM