Clerc at the Forefront of Timekeeping Beneath the Ocean 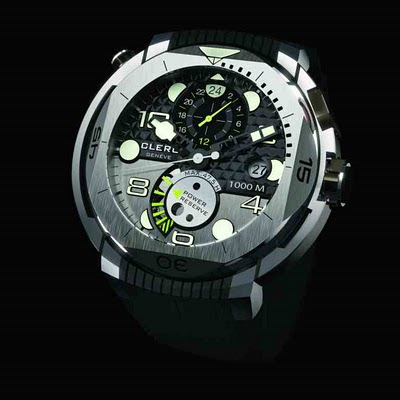 1000 meters below the sea is filled with strange and exotic oceanic life such as oil eating tube worms and tentacled transparent sea cucumbers where light cannot penetrate and humans can only venture in a submarine, yet there is a watch, resilient enough to withstand the pressure of this environment. The watch is a Clerc Hydroscaph sporting a water resistancy of 1000 meters and a crucial automatic helium escapement valve - making this watch one of the most sophisticated diving watch.

Geneva based Clerc has been crafting timepieces since 1874 and is committed to horological research and development in outer space and deep sea ocean explorations. The deepest SCUBA dive on record is 330 meters performed by French Scuba Diver Pascal Bernabé, while the deepest dive by a Navy diver in Atmospheric Diving System (ADS) suit is 610 meters. Gerald Clerc has indeed prepared for the future of diving timekeeping by crafting a timepiece capable of reaching 1000 meters. A depth no man has ventured.

The Clerc Hydroscaph Steel Version is comprised of a 75 part highly sophisticated case which required hours of research to provide the highest integrity under the most adverse conditions. The high grade steel fashioned in Clerc's distinctive octagonal case -a square fused to a circle - avoids the look of clunkiness, but rather imparts a sleek sophistication.

Clerc has used a photoluminescence which enables the diver to read the time even in the murky dark conditions of the deep sea.
The helium valve enables divers who operate at great depths and spend prolonged hours under extreme pressure breathing a mix like trimix containing gases such as helium (tiny molecules) or hydrogen (smallest molecules found in nature) to release the helium molecules that have worked their way through the o-rings or other seals. The helium and hydrogen molecules cause no damage when the watch is at great depths under pressure but as soon as the diver resurfaces, a pressure difference occurs between the trapped gas(es) inside the watch case and the surrounding air. This can cause the crystal to pop off damaging the watch thus the helium valve is a crucial edition to diving watches enabling the diver to release the gas build up and restore equilibrium. In the Clerc Hydroscaph the Helium Valve is Automatic removing the burden of the task from the diver. This feature is a great advancement in diving watches.

The watch is powered by a the automatic C606 movement with a 45 hour power reserve boldly indicated at the 6'o'clock. A GMT 24 hour dual time zone is visible at the 12 'o'clock position, which can be adjusted via a dedicated crown at the 10'o;clock. A date aperture is visible at the 3'o'clock position.
The watch dial is protected by a 4.00 mm glare proof scratch resistant sapphire crystal. The strap is vulcanized rubber which ensures maximum mobility, versatility and comfort as well as supreme durability.
For Clerc Diving Watches visit THE WATCHERY up to 71% off the MSRP. Get your gear ready and get a Clerc.
Posted by Vicky Van Halem at 10:18 AM