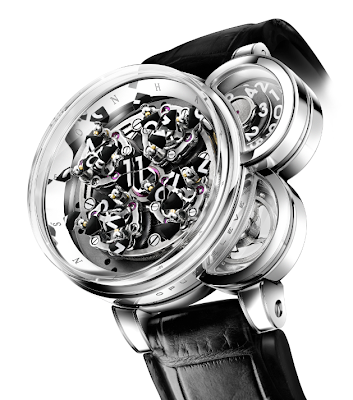 Baselworld 2011 has an earth shattering star - The Harry Winston Opus Eleven. (see video) Beneath the dial it seems a series of haphazard twisted gears wreak havoc on the display of time. What may seem like random disorganization, on the contrary, is precision and competency at its best.

When the hour arrives, the predominant dial awakens into motion and from its center the hour emerges. It seems somewhat of a dizzying commotion, but the activity is in fact the result of 24 placards swiveling and rotating on numerous gears set on an epicycloidal gear train, These 24 components display quarters of numbers; which are ingeniously configured to meet up at the hour. Jutting out from the main dial is to semi dials. The top semi dial contains the minutes displayed on jumping disc; a jumping disc for the tens and a running disc for the units. For a clear understanding of the ingenious mechanism watch the video below.

To make sure this complicated configuration runs as smooth as possible, 155 jewels are used. In total the Harry Winston Opus Eleven contains 566 parts.
Harry Winston will only produce 111 of the Opus Eleven; 100 in white gold ,depicted above, and 11 smothered with diamonds (It is Harry Winston timepiece after all). A white gold timepiece will run you at $230,000 and the model covered in diamonds will cost $289,000.00.

I have an inking this watch will fetch a prize or too in the future.