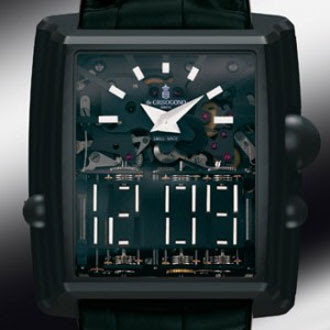 The original version - to your right glows green - however there are no tiny LED lights embedded in its dial, and no quartz battery within its case. The watch, brain child of Fawaz Gruosi - founder and chairman of de GRISOGONO, is completely mechanical under the disguise of a digital.
The upper half of the watch is your conventional analog display, and the bottom portion is a numerical display controlled by 651 mechanical components. 23 cams connected to a set of gears collaborate in unison to trigger the change of hours and minutes The digital display utilizes 23 horizontally and vertically positioned micro segments. The Vertical segments are 9 mm high and weigh 25 milligrams. The Horizontal segments are 2.90 mm lengthwise and weigh a mere 10 milligrams. The segments have four sides: two opposing visible faces with colored strips and two opposing unmarked faces. As the time changed, the segments rotate by 90°, thereby displaying the correct change. The change, which can include 1 to 12 segments, occur in a blink of an eye. The watches digital numbers provide an illusion of the quartz watch, as the strips create a vivid contrast to the interior blackness of the watch.

This watch boasts a 35 hour power reserve, quite remarkable if you think about the two completely different displays.

The newer version -stark white against matt black- will be revealed at Baselworld. Baselworld is the leading annual watch and jewelry industry fare. This year BaselWorld runs from March 24th to March 31st in Basel, Switzerland.
Posted by Vicky Van Halem at 10:27 AM