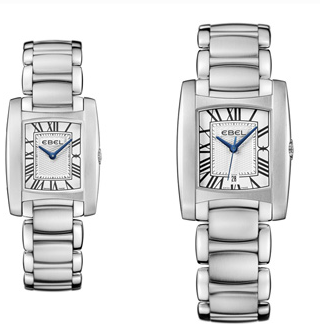 Ebel has introduced a new sleeker more feminine version of the Ebel Brasilia, with flowing lines and sensual curves. The curvaceous bezel hugs a dial where an almost full Roman Numeral set of hour indicators surround an exquisitely feminine guilloche pattern. Within the dial's center true blue hands accentuate the time. Ebel's signature double E lays claim at the 3'o'clock adding a distinctiveness to the dial.
The watch is available in two sizes - the larger size featuring a date aperture at the 6'o' clock position. Crafted in alternating high-polished and satin-brushed steel finishes, the new Ebel Brasilia is a fine example of Architects at work.

Ebel History
Ebel, a company capable of crafting a watch with the perfect balance of femininity and elegance. In July 1911, Eugene Blum and Alice Levy, husband and wife stepped into the world of Horology by registering their new company. The name they chose is the acronym for their names: Eugene Blum Et Levy and thus nestled in the hills of La Chaux de Fonds, became the Capital of Ebel.

Just one year later, in 1912, Ebel presented its first wristwatches. In 1914 Ebel won a gold medal at the Swiss National Exhibition for patented ring watches with pallet escapement and a hidden time setting. In 1929 Charles-Eugene, son of Eugene and Alice joined the company, and together with watchmaker Marcel Reuche, he organized a flawless production control system, which guaranteed unsurpassed quality. From 1939-1945 Ebel went into production for the British Royal Air Force. Through the years Ebel has received many awards for their innovative cutting-edge ideas.
In 1975 Eugene and Alice's son, Pierre-Alain Blum, gained full control over Ebel. Ebel catapulted into a new dimension of watch manufacturing, making Ebel what it is today: One of the top five Luxury Watch Brands on the market.