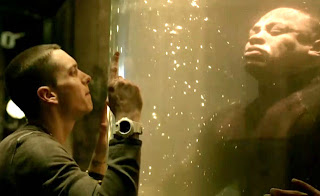 The cool watch this summer is definitely the Casio G-Shock. Ever since I spotted Eminem's G-Shock in his Music Vid "I need a Dr" with Dr Dre, I knew this watch had become an icon for hip hop coolness. I mean you could not miss the crisp white DW-6900FS-8 model G-Shock watch amid the eery dimness of that weird recovery lab. Watch the video and you'll know what I'm talking about.
And if that's not enough on this latest music vid from Coldplay, "Every Teardrop is a WaterFall.". I spotted a bright yellow G-Shock on the lead singer, Chris Martin's arm" . Chris Martin was also spotted wearing a bright blue 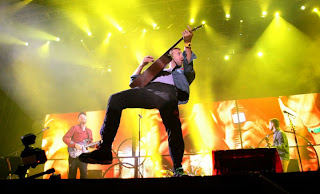 DW-6900MM-2 model G-Shock at a Pinkpop- a Dutch Festival
. Ludacris is wearing a G-Shock on Fast Five. Back in 2009, Ludacris encrusted or "iced" his G-shock in diamonds. 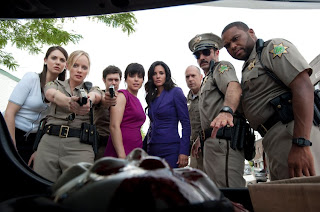 Keanu Reeves wearing a DW5600C .
The guys on Jersey Shore Season 3 all wear G-Shocks, so do the Doctors on Scrubs and the contestants in the Amazing race. Said, on Lost Season 2 wears a Casio G-Shock DW -6600 in his back story.

If there was ever a watch with so much exposure, it is the Casio G-Shock.

Please add any other instances you noticed a G-Shock on celebs in movies, music videos, or anywhere else - please comment.
Posted by Vicky Van Halem at 10:37 AM