Corum opted to use its latest horological achievement, the Corum Golden Bridge Automatic, unveiled in Basel World 2011,  for the Only Watch 2011 Auction taking place in Monaco to benefit the research and treatment of Duchenne Muscular Dystrophy. 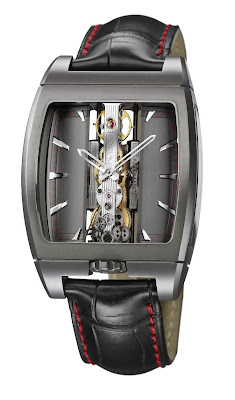 Introduced in the 1980's, the Golden Bridge Collection was quite unique, not in the representation of  time, but in the representation of the movement.  However for the past 30 + years the Golden Bridge was a manually wound watch requiring daily winding.  Manual winding, although still used in some haute joaillerie watches, is a thing of the past.  Corum realized for the success of the Golden Bridge movement its ability to wind automatically, (by the gentle swinging motion of ones arm) and not by the constant winding of the crown, was imperative.  However to convert the Golden Bridge movement from manual winding to automatic proved quite a challenge, as a result of the linear effect of the whole design.  A semi-circular rotor was out of the question.  It took Corum four years of research and development ,encompassing metallurgy and physics, to finally unveil an effective linear winding system.
The movement: A Corum Caliber C0313 - an automatic linear-winding baguette. One can actually view the winding mechanism from the watch face, both sides, and from the case back, as the entire movement is on display protected by scratch resistant anti-glare sapphire crystal.

Linear Oscillating Weight:
Material: Platinum - one of the rarest elements in the earth's crust, dense, resistant to corrosion and stable at even very high temperatures.
Weight: 4 Grams 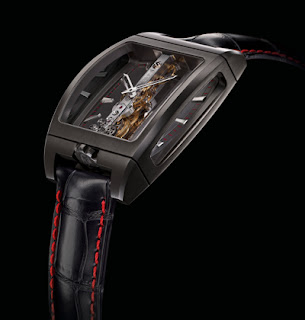 Range of movement: 1 cm then motion is slowed by a system of gaskets and then slides back thereby requiring minimal energy to perform the sliding movement with minimal friction. This dampening ensures no damage occurs from the forceful contact of the oscillating weight to other parts of the movement.  Another precaution Corum has taken to prevent any damage from the sliding motion of the oscillating weight is by using Beryllium Copper in the contact zones between the chariot and rails.  Beryllium Copper attains the highest strength to any copper-based alloy, physically tough, non-magnetic and  retains its shape if subjected to repeated stress and strain  (ref Wikipedia).
the
As the linear oscillating weight slides back and forth along its PTFE Teflon coated steel rails, the energy is transmitted to a rack attached to the oscillating weight which is constantly engaged with a reverser system allowing for undirectional winding.  In addition to enhance effectiveness and reduce friction, ball bearings are used.  Due to the clever compilation of the parts, and the fitting materials used, no lubrication is required.


Watch Movement: The movement powered by the linear winding mechanism is a Caliber C0313, equipped with a variable-inertia balance,  comprised of 194 parts beating at 28,800 vph and sporting a 40 hour power reserve.  The barrel has been reduced, so as not to break the graceful longitudinal perception of the movement.  The exquisitely crafted main plate and bridges are fashioned from 18k white gold featuring a unique vertical guilloche motif matching the oscillating weight.

The Only Watch 2011 Golden Bridge Automatic case is crafted from titanium  covered in a Titalyt (not sure if this is the same Richard Mille Titalyt process of titanium oxidation by electro-plasma or not ).  The case with its matt exterior and hardy charcoal hue evokes a sense of indestructibility and incredible durability.  The red stitching on the black crocodile leather strap compliment the dark shades of the watch.  It is a pity this watch is limited to one, but I think Corum is experimenting with the "car racing" designs that are quite successful in other brands like Chopard, Fortis, Tag Heuer, BRM e.t.c
Corum has always seemed a little reserved and outdated in their representation of their Golden Bridge Collection, but the new color scheme of the Only Watch 2011 really works.