A Panda on a Thunderbolt MB&F HM4 Only Watch Auction 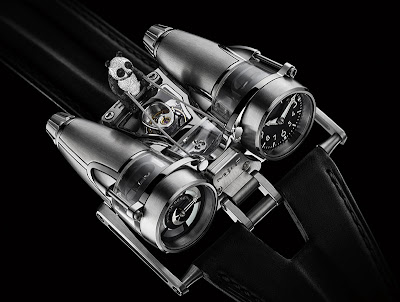 He is in a wheel chair now, watching Todd and Jack kick around a soccer ball; smiling a little as the ball bounces into Mrs Nell's rose garden for about the hundredth time that day, and Mrs Nell coming out and yelling again. The sky is the perfect blue, and the sun delivering just the right amount of warmth... and he, Sam, is inside.
"Sam shall I wheel you outside for a bit, just to catch some sun," his mother had asked, pain and worry naked in her eyes.
"No! I'm good" he lied wanting desperately to be like every other kid on a hot summer's day, wanting desperately to run again.
"Hey Sam!" Todd yells, and runs... runs towards the window. Sam quickly closes the blinds. Sam hears his mother say, " Todd, maybe another day okay."

The room is cool, and Sam ,clutching his stuffed Panda, closes his eyes. In an instant he is no longer "Sam stuck in a wheelchair in the house on a great day Sam". He is Sam "Master of the Thunderbolt with Panda Second in Command." Panda and Sam climb into the seat between the powerful turbine engines and he takes hold of the reigns. The Thunderbolt roars to life, and he Sam, "Master of the Thunderbolt with Panda Second in Command" begins to soar. The Thunderbolt plummets across open fields, houses, cities towns turning everything into a colorful blur, people hold onto hats looking up, but all they see is the sun glinting on a tiny dash of metal. The wind is whipping at his hair and ruffling Panda's fur. Sam turns to Panda and yells across the fiery din of the engines, "It is time Panda! It his time!" Sam points the Thunderbolt towards the galaxies filled with planets to explore and comets to race.

The imagination of a child so free from the confines of physical ailments, and perfectly represented by MB & F HM4 (Horological Machine 4) Thunderbolt Timepiece. A Panda, representing a child's bedside companion during illness, atop a flying machine. The Thunderbolt is MB & F's contribution towards the Only Watch Auction in 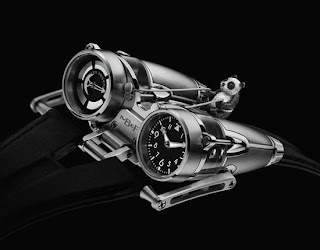 Monaco this September to be Auctioned off by Antiquorium to benefit the research of Duchenne Muscular Dystrophy. (a terrible debilitating genetic disease appearing in early childhood causing extensive muscle degeneration.)
The Thunderbolt is an impressive Horological Machines created with much unbridled creativity by Horological genius Maximilian Büsser in collaboration with Paris-based Chinese artist, Huang Hankang, who painted the Panda astride the Thunderbolt which served as the reference for the HM4 Only Watch. The painting will accompany the watch sold to the highest bidder.

Crafted from solid gold, a panda bear controls the Thunderbolt's golden reigns. The Panda and reigns are removable leaving the HM4 as we know it. Huang Hankang signature is crafted on the sapphire crystal case-back. Just at a glance, even a novice acknowledges, this timepiece is something quite different from the dial, movement, strap norm. After all the case of this timepiece or Horological Machine (a term MB & F most prefers) is comprised of two miniature turbine on either side of a central platform, which houses most of the complication. 311 in-house specialized components power the Mechanical Timekeeping Machine, including two mainspring barrels enabling a 72 hour power reserve. The power reserve is displayed in the opening of one jet turbine - fashioned like a fuel gauge - and the hours and minutes are displayed in the other.
The straps are removal, enabling one to display the timepiece as a time keeping sculpture in 18k white gold.