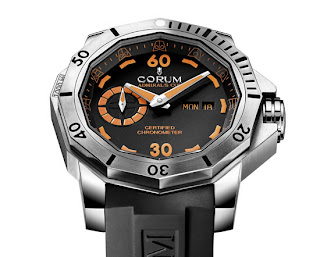 Corum adds a watch to the long list of diver's watches which can dive far deeper than man can venture beneath the ocean.  However, venture or not, the new Corum's Admiral Cup Seafender 48 Deep Dive is a impressive Diver's watch equipped with all the necessary diving functions.

In all serious diving watches I always look for a Helium Valve.  In this case the Corum has one.  A helium valve is crucial in scuba diving scenarios. A helium valve enables divers who operate at great depths and spend prolonged hours under extreme pressure breathing a mix like trimix containing gases such as helium (tiny molecules) or hydrogen (smallest molecules found in nature) to release the helium molecules that have worked their way through the o-rings or other seals. The helium and hydrogen molecules cause no damage when the watch is at great depths under pressure but as soon as the diver resurfaces, a pressure difference occurs between the trapped gas(es) inside the watch case and the surrounding air. This can cause the crystal to pop off damaging the watch thus the helium valve is a crucial edition to diving watches enabling the diver to release the gas build up and restore equilibrium.

Other properties of the Corum Admiral's Cup Seafender 48 deep Dive which makes it a hard core Diver's Watch.  The watch adheres to the strict ISO 6425  guidelines relating to Diver's Watches, which is defined as: "A watch designed to withstand diving in water at depths of at least 100 m and possessing a system to control the time"
The testing of Diving Watches occurs in still water under 125% of rated water pressure.  In other words, a watch claiming a 200 meter water resistance rating has been tested in still water at a depth of 250 meters.
Diving watches are tested in static or still water under 125% of the rated (water)pressure, thus a watch with a 200 meter rating will be water resistant if it is stationary and under 250 meters of static water.
Corum has met the criteria by crafting the watch with a Grade 5 titanium case.  Grade 5 titanium is considered an alloy as it consists of 6% aluminum, 4% vanadium, 0.25% iron, 0.2%  Oxygen and the remaining percentage titanium.  Titanium Grade 5 is utilized extensively in Aerospace, Medical, Marine, and Chemical Processing as it is stronger than commercially pure titanium while maintaining its stiffness and thermal properties. Titanium Grade 5 is heat treatable, strong & corrosion resistance.
Corum has crafted the 48mm case with a thickness of 18.9mm and a screw down crown. An automatic Caliber CO947 with a power reserve of 42 hours is a certified Chronometer as certified by the COSC.

Nautical Flags fly just below the unidirectional rotating bezel- a signature of all Admiral Cup Corum Watches.  Another crucial aspect of a Diver's Watch is the readout in murky conditions.  Depending on the version, this watch is available in two, the hands and hour markers are coated in either highly luminescent bi-light orange coating (watch image above) or black superluminova.  The dial read out is clear as a result of the bold markings.  Central hours and minutes as well as a small seconds at the 9'o'clock and day and date at the 3 'o'clock provide crucial time tracking.
The Corum Admiral's Cup Seafender 48 Deep Dive is available in two versions, the first which I have described above in bright orange is available in a limited edition of 200 and a PVD blackened version with a Grade 5 titanium case sports a 18 carat gold bezel, which is available in a limited edition of 100.
For a diver serious about diving, a Corum Admiral's Cup Seafender 48 Deep Dive, won't leave you high and dry.