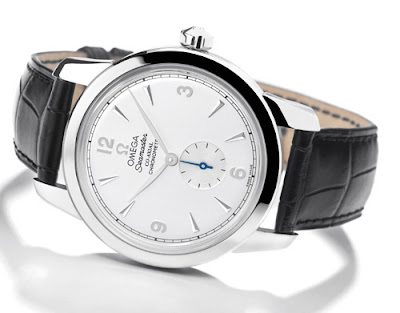 To Commemorate Omega's 80th year of Olympic timekeeping come summer 2012, Omega unveils the Omega Seamaster 1948 Co- Axiel "London 2012" Limited Edition, exactly the year to the date before the opening ceremony of the London 2012 Olympics. London 2012 will mark the 25th time Omega is named the Official Olympic Timekeeper. Omega's first Olympic timekeeping year was back in Los Angeles 1932. Omega kept time using its chronographs and stop-watches developed by its subsidiary Lemania. Omega's use of its 1948 Seamaster to commemorate the Olympic London 2012 is by know means a coincidence: 1948 marked  the debut of the Seamaster and it the last time London hosted the Olympics. Thus it stand to reason this watch will only be available in limited edition of 1,948 pieces.

In 2012 the demand for timekeeping precision is even greater with Omega's increasing ability to mark the time in smaller and smaller increments. In addition, Omega is responsible for compiling the data and statistics of the games and the hiring of expert data processing professionals. The highly efficient time keeping techniques of Omega has come a long way from the 1948 Olympics when Omega introduced the  "Magic Eye" - a photo finish camera Omega pioneered for sports. 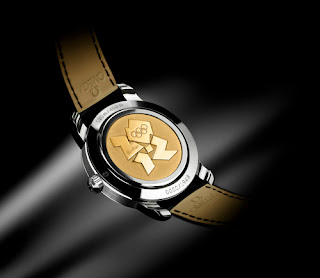 No sign of the London 2012 Olympics mark the dial of the Omega Seamaster 1948 Co Axiel "London 2012" , as in previous years-see inset, which may disappoint some who were expecting to see Olympic Colored  Numbers and the interlocking Olympic circles.  However, as you can see the Olympic London 2012 logo is emblazoned on the case back on a yellow gold disc looking very much like an Olympic gold medal.  The watch itself is the picture of elegance - a fine commemoration piece rather than a rugged portrayal of sports.

Within its 39mm polished and brushed stainless steel case, is an Omega Caliber 2202 with a Co- Axiel escapement (now a mainstay on all new Omega timepieces) on three levels and a free sprung-balance.  The movement of the timepiece has undergone rigorous testing and consequently awarded the title of chronometer.  A polished stainless steel bezel frames a opaline silver dial marked by a white gold vintage Omega logo, and a small seconds dial at the 6 'o'clock position bringing a touch of blue to its face .  Four white gold bold Arabic Numerals mark the 3, 6, 9 & 12 dial positions while slender hour indicators mark the rest.  Polished Stainless Steel Lugs hold a leather strap in place, which closes via a vintage polished stainless buckle.

This latest edition to Omega's longstanding and historic contribution to the Olympic Games is a fine example of the brevity of  timekeeping tradition without being blinded by ribbons and frills.
Posted by Vicky Van Halem at 12:50 PM