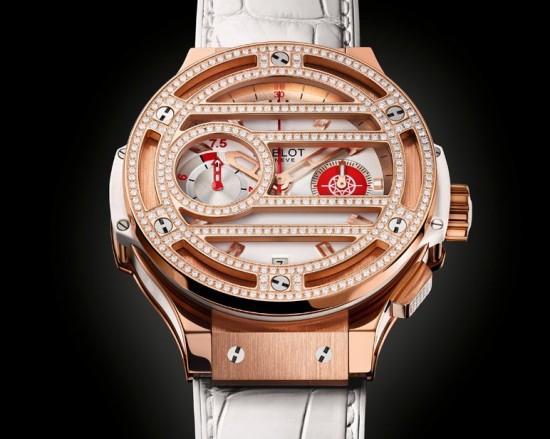 I had never heard of the glittering shores of  Costa Smeralda before Big Bang unveiled the Big Bang Costa Smeralda for her and the King Power Costa Smeralda for him  as a tribute to the 50th Costa Smeralda Consortium Anniversary.  After doing a bit of research and a lot of drooling, I am smitten.  Costa Smeralda, founded 50 years ago by  Prince Karim Aga Khan himself, with an abundance of pristine sandy beaches, an aquamarine sea, the world class Pevero Golf Club host to the Italian Open and the quaint village of Porto Cervo is truly a worthy location of mention and destination. 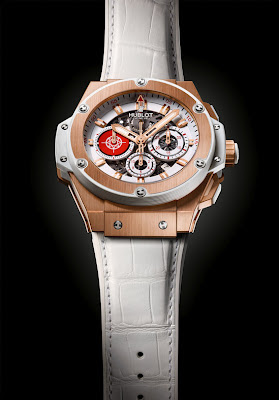 Hublot red and white color theme is a highly popular  combination dating back to their early Big Bag Models
Hublot timekeepers is not stranger to this picturesque location, dotted around the Pevero, Hublot Clocks grace the walls tracking time for celebrities and honorees, one gloriously relaxed minute at a time.

Both watches sport Hublot red and white color theme which is a highly popular combination dating back to Hublot's early Big Bang Models.  The white straps,  warm red gold and red accentuation represent a perfect summer timepiece worn best on the deck of a yacht.

The Big Bang Costa Smeralda is accentuated with a diamond covered grill inspired by Hublot's the polo-themed watch - the Chukker Bang. ("Chuka" refers to a single period play in polo). The grill prevents damage to the dial during play. (If you remember - Jaeger LeCoultre entire Reverso Collection was inspired by the game of polo).

The King Power Costa Smeralda is more macho in appearance with a black dial center and sub dials; however a lightness of appearance is notable in the white straps and outer dial.  A perfect blend of irresistible masculinity and charming elegance. 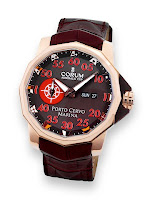 The watches were presented on the eve of July 16th at an exclusive event organized by the dala Di Volpe Starwood Hotel.  The guests were treated to a  performance by Elton John.

Email ThisBlogThis!Share to TwitterShare to FacebookShare to Pinterest
Labels: Hublot