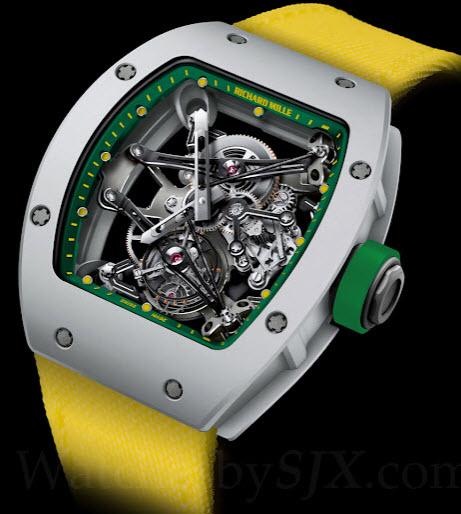 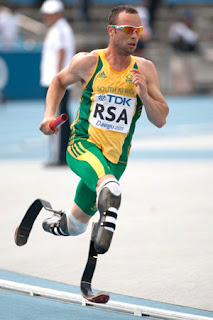 Richard Mille unveils an exquisite watch baring the yellow, black and green color scheme.  The sprinter who will be wearing this ultra light watch  during the race is still a mystery.

The sprinter's name will be revealed just three days after the completion of the London Olympic 2012 as per Olympic regulations.  Although the colors suggest the flag of Jamaica  - ruling out Jamaican Usain Bolt as Hublot's Ambassador  - I think the colors could represent the Olympic garb worn by  a sprinter ... say South African Oscar Pistorius. (and I am over reaching here).

Oscar Pistorius otherwise known as "Blade Runner" - is the first double amputee to ever compete as a sprinter in the Olympic games.  He races on Cheetah Flex Foot Carbon Fiber Blade with track cleats fitted on the bottom.  After much debate as to whether he was able to run in the Beijing Olympics due to his unfair 'advantage", he secured a ticket to London for the  Olympics 2012 and has been admitted to the 400m and 4 X 400m relay.

Whether Oscar Pistorius is the sprinter who will wear this watch, I do not know, but if there is one thing Richard Mille and Oscar Pistorius have in common it is in the use of ultra lightweight innovative materials and design to beat world records.


The white case protecting the tourbillon is surrounded by an arresting green flange punctuated by striking yellow hour markers.  The green crown matches the flange.  A velcro yellow strap completes the look. The colors are more the Jamaican Flag hue, but since Bolt is taken it is a definite mystery. (Update - Mystery Solved - Click here for updated info)

As to the mysterious identity of Richard Mille's runner - we will just have to wait and see.  If Richard Mille does choose Oscar Pistorius as its Ambassador, it would be a great move since South Africa has huge growth potential in the luxury watch market.
Posted by Vicky Van Halem at 11:34 AM