Hublot Ambassador and Olympic Sprint Champion Jamaican Usain Bolt is prepping to beat his own personal record of 9.58 seconds in the 100 meter dash at the London Olympics.  The question as wot whether Usain Bolt could beat his own record and run  race in a mere 9.4 seconds was the object of a Dutch Mathematical Study.  The authors of a Tilburg University study revealed today that Usain Bolt could still shave off two tenths of a second and beat his record, but this was the absolutely lowest a world record could go.
... and as to how they worked this out , one of the study authors, Sander Smeets explained
"The study used various mathematical and statistical models collated from the best times posted over 100m by the 1,034 best male athletes going back to 1991"
This newest number overrides his previous  "ultimate world record"of 9.51.  I suppose this newer study was necessary before Usain Bolt proved Sanders 1991 study wrong. 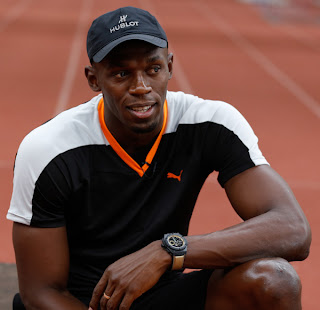 For Usain Bolt, Hublot created a Hublot King Power Bolt Watch Limited Edition.  A striking feature of the watch is its unique strap.  The strap is actually crafted from identical gold colored synthetic leather as the shoes Usain Bolt wore when he sprinted to victory in Beijing 2008 and broke the world record.


The 48 mm black ceramic case and black ceramic bezel punctuated by Hublot signature 6 black PVD H-shaped relief titanium screws surrounds a gold circular satin-finished flange with 2N gold coating specked with green in representation of the Jamaican flag. A meteor gray silhouette of Usain Bolt is visible within the small seconds sub dial at the 9 'o'clock position.   Turning the case over one will find another silhouette of Usain Bolt on a sapphire case back.  The automatic mechanical Caliber HUB4100 comprising of 252 components and 27 jewels is protected by a resilient micro-blasted black ceramic case.  The Usain Bolt Watch is Limited to just 250 pieces and has a 42 hour power reserve.

At this year's London Olympics the world is watching Usain Bolt.
Posted by Vicky Van Halem at 5:42 PM

Email ThisBlogThis!Share to TwitterShare to FacebookShare to Pinterest
Labels: Hublot