A Breitling Barnato for the Bentley Boys

Barnato used part of his multi-million dollar fortune to pursue his passion for the race track. In the 1920's Barnato was a member of an elite circle of wealthy British motorists ,the Bentley Boys , who would only be seen in W.O. Bentley's. The highest point was from 1927 to 1930 when the group won four consecutive victories at the 24 hours of Le Man. The latter three were won by Barnato himself, the only races he ever entered, making him the only Le Mans driver with a perfect wins to start ratio.

Barnato is closely tied to the history of Bentley. So inspired by the 1924 Le Mans win by John Duff and Frank Clement, Barnato dug into his multi million dollar fortune and agreed to finance Bentley's business becoming a majority shareholder and chairman in 1925. 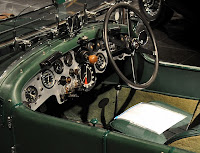 The new Breitling Barnato Collection makes its namesake proud. The dial represents a passion for racing, three sub dials emblazoned on the white dial represents the shape of a steering wheel clutched while careening around hairpin bends. The raised knurled motif of the bezel brings to mind the dials on

Via a scratch resistant sapphire crystal, an attractive oscillating weight, powers the COSC movement, which is equipped with an innovative "30 second chronograph" function. The oscillating weight is fashioned after wheel rims of the new Bentley Continental GT.

The Breitling Bentley Barnato timepiece represents the "golden age of sports".
Posted by Vicky Van Halem at 11:07 AM