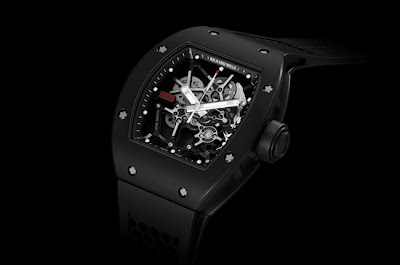 Just recently I happened upon the term Chronofiable®, thanks to the super lightweight RM 035 manufactured by Richard Mille. The RM 035 is the first Richard Mille manual winding movement to have a Chronofiable Certification and weighs a mere 4.3 grams.

What is a Chronofiable Certification? It is a Certification awarded to a timepiece that has undergone and passed a series of tests focusing on the durability and reliability of a movement worn on the wrist on a a regular basis. For example Richard Mille boasts excellence, durability and reliability on the tennis court. Under these circumstances the watch is subjected to extreme shock when the wearers wrist swings and makes contact with racket to ball. In fact, 2010 three time tennis champion and Richard Mille ambassador, Rafeal Nadel, wore his RM 027 tourbillon while competing at Wimbledon. Although that watch was not Chronofiable certified, the new RM 035 is. The extreme testing the watch has endured to obtain the Chronofiable Certification will give some indication on how and how long this new model will fare on the tennis court.

How is this different than the Chronometer Certification tests? The rigorous testing in accordance with the ISO 3159 norm focuses more on the precision of the timepiece whereas the Chronfiable certification focuses on the durability, or wear and tear, of the timepiece over an extended period of wearing time. (click here to learn more about the COSC Certificate)


What types of tests does the timepiece undergo to become Chronofiable?
The timepiece is exposed to a accelerated aging test over the course of 21 days, which is equivalent to six months of constant wear. This process is divided into many components:
a) Initial inspection of the movements functions serve as a baseline for future changes occurring during the testing process.
b)Subjecting the timepiece to climatic cycles in dry/wet environment from –70°C to +180°C and measuring the resulting corrosion and performance.
c)Measuring the pull and push forces on the stem.
d) Measuring the forces exerted on push buttons such as chronograph controls, correctors as well as turning bezel.
e) Monitoring the efficiency of the power reserve.
f) Monitoring the movements reaction to magnetic fields.
g)Subjecting the movement to intensive linear and angular accelerations and decelerations.
h) Striking the movement with a heavy pendulum or striker, and subjecting it to some 20,000 shocks ranging from 250 to 5500 m/s2 (a constant acceleration of one metre per second squared) - not applied to timepieces with delicate complications.
i) Testing water resistance.
j) Performing electrical measurements.
k) UV testing on leather straps.
l) Performing the final monitoring phase, which involves applying the same monitoring technique used in the initial monitoring phase, and comparing the results. These results indicate if the timepiece can be awarded the Chronofiable distinction.

When was the Chronofiable test developed? The Chronofiable was initially a random series of reliability tests performed by the Federation of the Swiss Watch Industry (FH) in the 1960's and 1970's. These tests were performed with great success on about 1000 to 2000 "worn on the wrist" watches leading to the "Chronofiable reliability test procedure developed by a team of technicians resulting in the creation of the "Swiss Watch Industry Reliability Test Center (CCF SA)"
In 1985, the CCF SA was assigned to the Laboratoire Dubois and Chronofiable became a registered trademark.

Which label of quality requires the Chronofiable certification? The Fleurier Quality Label.

How is the reliability of the procedure insured? To maximize good reproducibility of the test conditions and ensure consistent long-term comparisons, the testing equipment is regularly updated, serviced and calibrated. The test parameters have not been changed in 30 years, thus providing the watch industry with a exceptional standard to grade the durability of a timepiece.

Does all testing need 21 days? No. Functions and components less effected by the frequency of tests imposed, such as tightness of back cover screws and casing-up screws, dial and hand integrity, can be tested over a shorter time period by subjecting the timepiece to accelerated application of multi directional shocks; however to reduce the entire testing procedure to just a few days will undermine the quality of the testing procedure and provide little indication of the actual performance of a watch worn at all times on a wrist. To date the Chronofiable testing is the best indicator of the durability of the wristwatch in its natural settings.

Although, Richard Mille has just unveiled the RM 035, the tests it has undergone to ensure its durability have been around for 30 years.