The First Plastic Watch Movement Ever Made Tissot IDEA 2001

Today the talk is about Carbon Fiber, Nanotubes, Daimeze and Zalium (Harry Winston specialty), but imagine when the prolific plastic came into being. Plastic infiltrated every industry changing our world forever. Now we are suffering the consequence of its use.  Just ask IWC ambassador David de Rothschild who sailed the world in his bottle boat named "Plastiki" to create awareness of the detrimental effects plastics create in our environment - particularly from the multitude of plastic nurdles floating  in our oceans.
But I have gone off topic - a terrible habit of mine.  I have not written this blog to frown at plastics, but rather to reminisce about  its entrance into the world of horology. 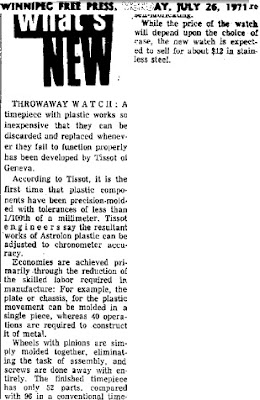 Plastics were around for decades before Tissot unveiled the groundbreaking  IDEA 2001 in 1971.

" THROWAWAY WATCH: A timepiece with plastic works so inexpensive that they can be discarded and replaced whenever they fail to function properly has been developed by Tissot of Geneva" 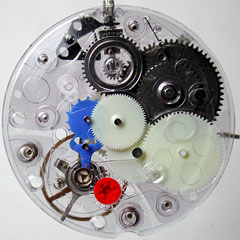 The IDEA 2001 also known as Astrolon 2250  or SYSTAL "Systeme Total d'Autolubrification" looks like a cheap wind up plastic toy - the kind that inevitably gets stepped on by oblivious adults and has to be thrown away.  In actual fact some 40 years later, some of these watches are in perfect working order keeping excellent time and requiring very little maintenance. The movement has only 52 components as opposed to the 91 components of a standard Swiss mechanical movement, since pieces are molded together rather that screwed.   As you can see there are no screws, but rather wheels with pinions. There is but one jewel - the impulse pin of the escapement which is a synthetic ruby. The only metal in the movement is the balance assembly  (gold plated brass and Elinvar balance spring), mainspring and barrel as well as the winding mechanism. The injected molded plastic components required no lubrication - plastic after all is made from oil - and the intended purpose was to merely throw away the watch once it ceased working. 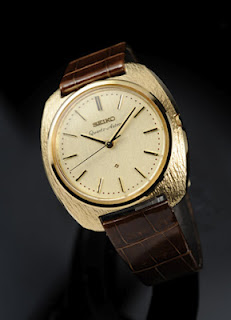 So why was this new innovative timepiece filled with promise cemented in a bygone era? The answer is "Quartz".
In creating the Astrolon 2250, Tissot was trying to straddle two vastly different horological worlds of the day:   The traditional world of mechanical watchmaking and modern day innovation.  The introduction of Japanese Seiko's Quartz Astron on December 25th, 1969 beating Girard-Perregaux Quartz Caliber 351 by an entire year, resulted in the "Quartz Revolution" or "Quartz Scare". Seiko was aggressively marketing its new quartz watches in the US.  By November 1972 it became apparent that Swiss exports of traditional watches were slipping beneath Japanese exports.  This sent the then $3 Billion Swiss watchmaking industry into a tailspin. Traditional watchmaking factories closed; thousands of jobs were lost and dozens of Swiss watchmaking companies went under.  The mechanical watch, plastic or not, was fast becoming obsolete.

The new millennium heralded in a new horological era - the return to mechanical masterpieces and the quest for new innovative materials. Metal mechanical components are once again being replaced by non-metallic pieces, which require little maintenance and lubrication.  One only has to turn ones attention to the Cartier ID Two Concept Watch sporting a Fiberglass Mainspring.  In the 1970's it seemed Tissot's vision of horological innovation was a tad askew amidst the quartz revolution, when in fact it was decades ahead of itself. 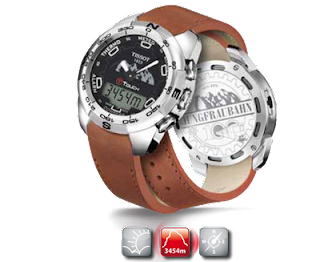 Although the sale of the Astrolon 2250 never gained any real momentum, Tissot, part of Swatch Group Ltd since 1983,  as a company has.  The Tissot T-Touch Collections are highly popular catering to a vast range of needs. Tissot boutiques are cropping up everywhere, the latest of which is the Highest Tissot Boutique in the world located on a mountain peak at Jungraujoch accessible by the breathtaking  Jungfrau railway.  Upon reaching the boutique, one will come face to face with the Tissot Jungfraubahn Collection honoring the collaboration with Tissot and the famous Jungfrau Railway.  Two Tissot Clocks were honored with Jungfrau Railway Countdown marking its 100th anniversary on August 1st, 2012. The Collection features 8 models as well as a Limited Edition Pocket Watch.

Email ThisBlogThis!Share to TwitterShare to FacebookShare to Pinterest
Labels: Tissot