The perks of living in New York is that once in a while I find time to go Watch Boutique hopping along Madison Avenue.  I highly enjoy these little adventures.  Oftentimes I head home with an armload of hands-on information.  I absolutely love knowledgeable salespeople and feel kind of jilted if they cannot answer my questions.

On my latest excursion, the salesperson in the first boutique I walked into was pleasant enough, but as soon as I inquired about the movement of a particular timepiece with quite an impressive range of functions, he frowned and said,
"We are not the watchmakers, but you can take this instead," He handed me an exquisite catalog with a detailed description of every movement.

My immediate thought was, "How long would it take him to read his own catalog book?"

I left the Boutique with one of the nicest catalogs I have ever seen, but lacking any renewed excitement about the brand itself.

The next Boutique I walked into was a low to mid range watch boutique with a lovely bubbly salesperson who really was very sweet.  The entire place was in bright pinks and purples with fine art depictions emblazoned beyond the showcases. She knew her watches quite well until I asked her if the dial hands were luminescent.  She peered at me quizzically not knowing that particular watch term, so I asked her if the hands on the watch glowed in the dark,
"I don't know?  I am never in the boutique after dark." she said
" but I will  take it into a dark closet and see."
As I said, she was very sweet.

She handed me the catalog and as I left the store, I breezed through it with casual disinterest 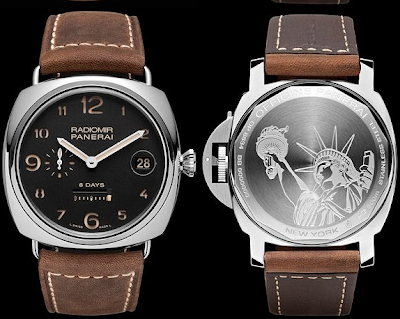 I was running out of time - in New York one is always running - and on an inkling I decided to step into my last Boutique of the day. I had walked many blocks and I was bone tired. But it was a good thing I did - for this last stop just about blew me away.
It was the Officine Panerai Boutique and the Swiss Salesperson not only knew each and every model, he knew the history of the company from origination with intriguing stories to match.  He knew the introductory date of each collection ; the models, the reason for production of the specific  model with historical facts to match. He gave me a detailed "Equation of Time" explanation in response to my query about Panerai's most complicated watch.   He knew the detailed history of luminescence, the story of the fate of the Radium girls. He taught me some intriguing history about watches and the military.  He even pointed out which Panerai watches are highly collectible in today's market.  He was  passionate about the Panerai watches and he was transferring the passion to me.

With all the brands out there, will I take more notice of Panerai?  Absolutely.

The funny thing was, I was only in the store for about 15 minutes or less, but the information I received was plentiful.

Some intriguing facts I learned about Officine Panerai which all need a separate blog each unto itself:
Any question I had, he elaborated until in my heart I felt connected to the brand, a brand I always felt was a little simplistic.  I had barely even blogged about a Panarai -  but no more!

Of course individual style weighs in on a person's decision to purchase a luxury timepiece as well as functionality to suit ones needs, but don't be fooled - emotions play a large part!
In this increasingly competitive horological market - Panerai is forging ahead in the right direction.

Email ThisBlogThis!Share to TwitterShare to FacebookShare to Pinterest
Labels: panerai