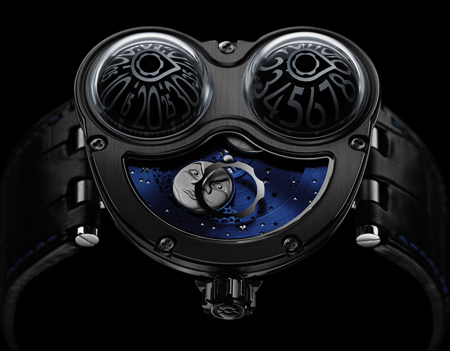 One thing I love about MB & F horological machines is its fluid capacity to incorporate other watch companies and artists into its Horological Machines without effecting the signature mark of its maker.   In the name of his company, "Maximilian Büsser and Friends, Maximilian Büsser stresses the importance of joint collaboration in creating masterpieces. Joint collaboration that harnesses the best of best to make a product of perfection.

In the past,   MB & F has collaborated with  Boucheron  to create an horological machine encrusted in  bright colored gems.   For the Only Watch Auction of 2011,  Maximilian Büsser worked in collaboration with Paris-based Chinese artist, Huang Hankang, who painted the Panda astride the Thunderbolt, to serve as the reference for the HM4 Only Watch. The  HM2.2 "Black Box"  had the bright signature shapes of Alain Silberstein. In 2009, the horological world was abuzz with the MB & F HM No.1 which heralded great watchmaking and designing  minds like Peter Speake-Marin, Eric Giroud and Laurent Besse. 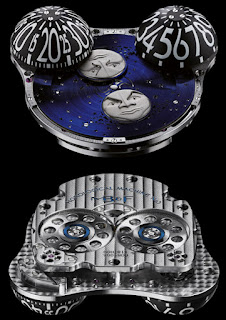 One striking collaboration produced the MB & F Moon Machine Watch.  The moon face is the  creation of Finland based watchmaker, Stepan Sarpaneva,who has contributed to Parmigiani, Piaget and Christophe Claret. His distinct Korona Moonshine face lends a creepy knowing look to his representation of the moon. Upon meeting Maximilian Büsser, Stepan Sarpaneva suggested a moon phase for the great MB & F horological machines. Maximilian Büsser loved the idea and a collaboration was born. The MB & F movement design is founded on the 3D mechanism created by Jean-Marc Viderreht/Agenhor. Stepan Sarpaneva's touch upon the Moon Machine Watch is threefold 1) The "Moon Face" 2) Northern Star theme 3) Sarpaneva's signature "tooth faced" Korona".

The HM3 in the Light of the Moon

On the MB & F Moon Machine, beneath the bulging  eyes of the HM3 Frog, seven bright stars of the  Ursa Major constellation portray the Big Bear Constellation and the seven stars of the Ursa Minor .  With an unblinking gaze, the moon ,an almost lifelike expression of amused disdain, play its phase as a good moon should.  It is no wonder the moon looks slightly unhappy, thinking it is the master of time now bends and bows to another - the frog - as it appears and disappears time after time within a distinct Sarpaneva Korona.

The finished product is a work of moving art.  Something of beauty with a definite function. The bulbous eyes are aluminum  rotating domes  upon which the time in hours and minutes is writ. Display of time is enabled by the passage of ceramic ball bearings and the rotating hemispheres.  A single tear centers atop each dome as if the frog crying its eventual demise.  An allusive multi level rotor disc crafted from steel and 22K gold is treated with laser to create the twinkling likeness of the Northern Stars.

The timepiece of 319 components and 36 rubies beat at 28,800 vph.  The hemispheres and the cased back and front are covered with scratch resistance sapphire crystal.