The Olympics Omega Lost to Longines. 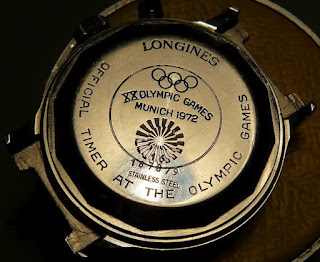 It is a great honor to be an Olympic Timekeeper - an honor which has been an unbroken chain of timekeeping triumphs for Omega since Los Angeles 1932. Almost unbroken that is... For whatever reason Omega lost its right to time the ill-fated Munich 1972 games.
In a recent exclusive interview with Master of Sports-timing ,since 1969, Omega's Peter Hürzeler and Swimming World, Peter explained:

"In those years, we were two big watch groups- OMEGA and Longines. We were timing competitions in our respective names, and were able to collaborate for major events, but, we were 30kms away doing the same thing. In 1972, after we lost (the right to time-sic) the Olympic Games in Munich, Swiss Timing was founded to be the leader in sports timekeeping. OMEGA returned as Official Olympic Timekeeper in 1976" 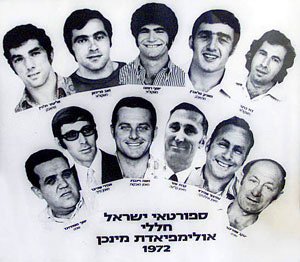 So Longines got the right to time the  Munich 1972 Olympic games, a bitter sweet one-time honor clouded by the Munich Massacre in which 11 Israeli athletes and trainers were surprised in their sleep and captured by a Palestinian Terrorist Organization - Black September. The 11 Israelis and trainers were all murdered.
Posted by Vicky Van Halem at 12:42 PM