Cyrus Klepcys Mars Watch Inspired by the Past, Indicating the Presentand Voyaging to the Future. 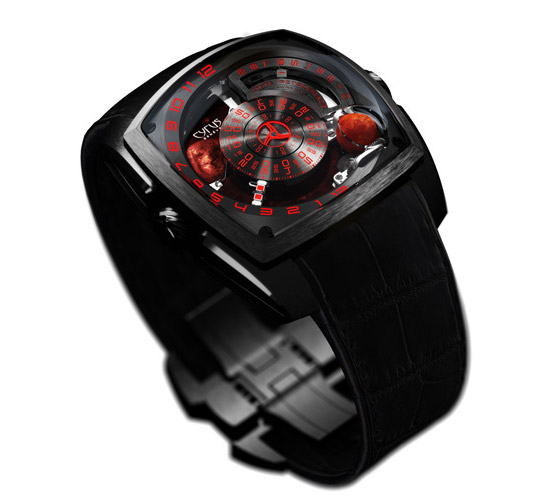 As Rover Curiosity unfurls its head, positions its cameras and beams down never before seen footage of Mars, the inhabitants of earth stare transfixed at images of the unknown. As the days go by Rover focus will improve and it will  beam back images in color with better more pronounced resolution.  Thus on this monumental day in the history of space exploration I must blog about a Mars Watch - The Cyrus Klepcys Mars Watch.
The Cyrus watch brand new and already iconic Klepcys Collection - a collection  which took three years of research and development as well as a multiple patented functions -  was awarded the best brand in the category  "cutting-edge watchmaking" at the "Nuit de l'Horlogerie" back in May at the Grimuldi Forum, Monaco.
Just by looking at the complex watch dial featuring a miniature Mars, one can determine this watch was created with calculated ingenuity, in part due to Cyrus collaboration with Jean-François Mojon recipient of the best conceptor / developer at the Geneva Watchmaking Grand Prix held in November 2010. 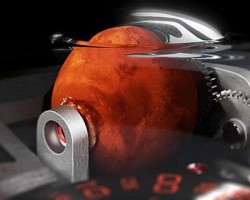 For the Cyrus Klepcys Mars Watch, the moon was replaced by Mars. The rotation of Mars differs slightly to that of  earth.  24 hours, 39 minutes, and 35.244 seconds is a day on Mars as opposed to 23 hours, 56 minutes, 4.2 seconds on earth.  Thus Cyrus has adjusted its miniature 7.6mm 3D Mars to perform the rotation to mirror Mars. At the 7 'o'clock the "Face on Mars" peers out in the same likeness as it was first spotted on Mars in an image from Mars taken by Viking 1 on July 25th, 1976.   Scientist ascertain  the face embedded in the Cydonia region of Martian landscape is merely a Martian mountain, but others perceive it as the work of some other kind.


The Cyrus Klepcys Mars Watch is limited to 33 pieces, a great gift for the mo-hawked Bobak Ferdowski,  flight director for the Mars Science Laboratory Curiosity mission.  The 48mm titanium case houses an automatic CYR599 movement vibrating at 28,800 vph is  comprised of 366 components equipped with a high inertia balance for improved adjustment ability, gears sporting optimized teeth for reduced play, innovative Cyrus screws and high grade stainless steel construction for heightened resilience and corrosion resistance. The movement has a 40 hour power reserve capability.  The scratch resistant sapphire crystal encapsulating the Mars Lander in a protective dome covers a dial of design excellence. The 3D retrograde display indicates the hours, the exact height of the retrograde hand is precisely controlled with a patented ruby bearing.

How is the time read on the Cyrus Klepcys Mars Watch?

The hour is situated on the right side of the case as a retrograde display indicated by a rod like component which spins around to indicate day or night.  The other side of the rod indicates the minutes situated on the outside ring surrounding the Cyrus Central Axis.  The inner ring displays the seconds.
A large retrograde date indicator also utilizes a spinning indicator tens hand crafted with four sides marked from 0-3. The date hand not only revolves around its own axis, but also moves along the retrograde date indicator numbered from 0-9, indicating the second digit of the date.
The Mars indicator is quite useful to the guys at NASA, and a few really huge enthusiasts and sci fi people, which judging from the 33 Limited Edition is not a watch for the general population. On the other hand this Rover Curiosity hype gets me thinking otherwise.

Although it is not blatantly obvious, there is a rotor with ceramic non-lubricated ball bearings winding the mainspring originating from the swinging motion of ones arm.

The back of the case plays tribute to Cyrus the Great in an 18k red gold medallion representing the stater coin of Cyrus.

The rubber watch band features 3D pyramids in the likeness of the red landscape surrounding the "Face on Mars". Red Stitching accentuates the red on the dial   The strap is affixed by a triple folding clasp  matching the shape of the signature Cyrus case and stamped on  cap with the Cyrus logo.

The delivery of this watch is "out-of-this-world".  It is presented in a red anodized aluminum sphere sporting a a Swiss Kubik watch winder at the center.

The Cyrus brand is quite
new, created by cousins - double cousins - fathers are brothers and mothers are twins - who took an oath that together they would embark on a great journey. Julian Lecamp, an architect and engineer by trade has applied his knowledge to the architecture and design of the timepiece and Laurent Lecamp, an expert in watch marketing and supply and a professor in luxury products at many known universities has the knowledge to make this brand work.  The name they chose originates from a great conqueror "Cyrus the Great" who founded the Achaemenid Emperor over 2,500 years ago. His kingdom spanned far and wide and he was known as the "King of the Four Corners of the World". He was an humane king who believed in freedom of his people.  He was a great leader, praised by many nations and the first to ever create a Charter of Human Rights.