Michel Jordi Dramatic Return to the World of Horology 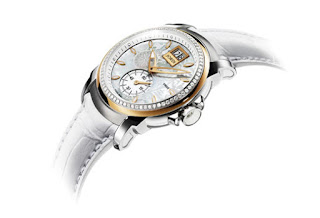 At every Geneva Time Exhibition, I always discover a brand that has ne'er crossed my path.  This years treasure trove was that which belonged to an intriguing Swiss watchmaker Micheal Jordi.  Once I discover the watchmaker or brand they become part of my horological horizon - always scanning for a new development. I find myself on a quiet evening thinking, I wonder whats up with that company or I have not heard much of this company lately, and then I peruse around the net and discover I have missed a milestone or two.

Well Michel Jordi has entered my radar so let us see what a Michel Jordi creation is all about! In an instant I notice a unique almost baroque feel to the watches, exuding vivid colors of extraordinary flamboyance, but then I notice a definite Eastern dimensions to the decor coupled with exquisite mechanical know how.  This is not some wannabee watch company which feigns shallow uniqueness.  This watch company is the real deal with definite undeniable horological prowess.

You may have heard of Michel Jordi in the past. Even owned or still own one of his "Swiss Ethno watches",  hot sellers back in the day.  Many of his watches had signature decorations of edelweiss flowers and Swiss cows often represented on Swiss Army products. You can still find them on ebay for around £100.  His work bared a true Swiss feel.  Born in 1948, Michel Jordi is the son of a watchmaker.  In 1988 he launched opened his own company and launched the "Swiss Ethno Watch" all quartz watches - which sold over half a million pieces between 1988 and 2003.  In 2003, he saw his company virtually collapse beneath his feet and he had no option but to declare bankruptcy.


Rather than falling into complete despair, Michel Jordi immediately set about reinventing his company -turning it in a new direction of Haute Horology.
In 2004, he unveiled a plan of creation a "Twins Watch" : an intriguing concept, which involves a two part watch case connected by a rotating lock.  The twins was initially available in two "Heritage models", Limited Edition of 99 pieces per model - 99 in pink gold and 99 in grey gold. The watches were listed at 53,000 € - ways above his previous mass market "Swiss Ethno Watches".

It would take years before Michel Jordi saw the fruit of his labor.  He launched his new and improved brand to the Swiss Market in October 2011 and then internationally after Basel World 2012. Even this soon back in the game, Michel Jordi has quite a selection of watches ranging from Men's Complication Watches launched at GTE 2012 called "Icons of the World"  There are 8 models to this collection:

3) Great Wall of China
4) Mount Fuji in Japan
5) Mount Sugraloaf in Brazil
6) Swiss Interlaken with the mountains of the Eiger and the Jungfrau
7) Geneva depicting the  fountain Jet d'Eau
8) New York's Statue of Liberty.

Each model is only available in a Limited Edition of three making this collection highly valued in its rarity.

Every component of the watch has been fashioned to depict the Icons of the World creating a masterpiece of design and function.

The Russia's Kremlin timepiece ,for example,  houses a movement created by Michel Jordi in collaboration  with Jean-Francois Mojon:  Owner of Chronode S.A from Le Locle - who is renowned for winning "Best Watchmaker of 2010" and inventor of Harry Winston's Opus X.   The hand wound movement is equipped with one of my favorite complications - the minute repeater.  To accommodate for  the additional power required by the minute repeater, the movement has a double barrel, reserving one barrel specifically for the gong-striking mechanism without effecting time keeping efficiency and enabling a 72 hour power reserve. The movement is visible via a transparent case back.

Michel Jordi also commissioned  Christophe Moines for the timepiece design. The actual Roman Numeral  time display featuring hour, minute and seconds hand is off center and accommodating a depiction of the Kremlin towers and the unique St. Basil's Cathedral on the skyline.  This dial design is used for all the timepieces in this collection displaying various images relating to that particular Icon.
A small blue disc is visible at the 2 'o'clock position which presents a written indication of the time of day for the repeater. The 3 o’clock position accommodates the control lever of the repeater

A lovely day/night indicator serves as the backdrop of the Icons of the Worlds Images.  The skeletonized hands are tipped with a type of phosphor compound enabling luminescence.    The aperture at the  4 'o'clock position houses the alarm and minute counters.The On/Off repeater switch is found at the 6'o'clock position where an innovative gong is visible at the 6 'o'clock position and chimes at a low frequency of 2Hz sounding like chapel bells ringing sounding across the Swiss mountains. The sound is produced by a hammer affixed and a monobloc bell fashioned from a single rectangular piece resulting in better sound amplification.

The crown situated between the 2 and 3 'o'clock resembles a deconstructed Swiss flag.

This year's GTE 2013, the new face of his brand has made a marked impression. One of the latest  timepieces is the Club 100 Chronograph which is displayed in the video below.  The "Icons of the World" were on display again this year.  A gorgeous selection of  Lady Icon Automatic displaying whimsical depictions of wooded mountainous landscape were also on display - timepieces which deserves a detailed blog.   A Mega Icon White Passion sporting a dazzling diamond bezel is one of the finest timepieces I have seen in a while.  I think we will be seeing quite a bit of Michel Jordi in the horological future.

A signature stamp or entire Swiss scene stamped on the watch band and dial irrevocably links Michel Jordi to his homeland in the Swiss Jura Mountains.