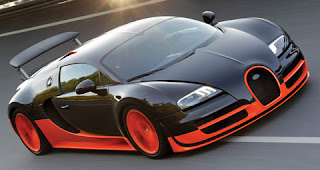 One of the stars at SIHH 2013 is the pair of Parmigiani Fleurier Bugatti Vitesse timepieces.
One model sports a bright orange dial made from Texalium - a woven  fiberglass based material coated in a thin layer of aluminum. A 36mm x 50mm x 22mm titanium case installed with 6 sapphire crystals ensures optimal visibility of the remarkable Parmigiani’s 333 component  manual wind PF372 movement within. A power reserve of 10 days makes its namesake proud with maximum torque optimization. The straps of course are Hermès - the result of a strong bond between Parmigiani Fleurier and the French manufacturer most notable for their fine leather goods.
These watches will run you into the six figures, but hey if you driving the car than you must be wearing the watch.  These watches were released alongside a restored 1935 Bugatti T57S ELECTRON TORPEDO.  Not automobile car restoration, but timepieces and automatons  is an integral part of Parmigiani's history.


To reach horological  heights attained by Parmigiani Fleurier, one must surmise that Micheal Parmigiani must have sped along at the speed of a Bugatti Veyron.  As to why I have chosen this particular super car aside for the fact that it is the fastest car in the world - visit supercars.org for verification.  (At 267 mph, (429 km/h), this baby yearns for endless open roads) Parmigiani has, in time,  irrevocably linked itself to the Bugatti Supercars.

It all began in 2004, when Parmigiani was so inspired by this well oiled speeding machine, the company created the Bugatti Type 370 and the Bugatti Supersport in white gold. The watches were specially designed to resemble a transversal engine.  The result was instant success and a mere two years later, Parmigiani released the Bugatti Vitesse in titanium and the Bugatti Supersport in rose gold.  Two years later  the gloomy watch recession of 2008 hit.  Watch companies were staring at their plummeting watch sale reports; cutting back on production and producing cheaper models in steel, but that did not deter Parmigiania - a hopeless optimist.  In these dark days the company was a twinkle on the horizon.  Parmigiani unveiled the ultimate in watch luxury - the $233,900 Parmigiani Bugatti Faubourg watch a worthy companion to the $2.2 million Bugatti Veyron Faubourg Par Hermes car.  Luxury upon luxury.

This type of optimism was not new to Micheal Parmigiani who in 1976 chose Fleurier in the Val-de-Travers region as the location of his first workshop. 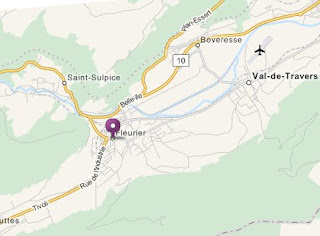 In 1976 this region was experiencing agonizing hardships.  It was the years of the Quartz Scare. Cheap Japanese quartz watches were flooding the market and the mechanical watch companies closed door after door.  Companies like Blancpain became dormant while others closed forever. Exports of Swiss Mechanical Watches plummeted from 40 million in 1973 to a mere 3 million a decade later. During this period over 90,000 employees in the industry were laid off.  It was a desperate time for Swiss Watch Manufacturing.  Yet it was during this time of incredible uncertainty in the future of Swiss Mechanical Watchmaking, the doors of Micheal Parmigiani's workshop, against the advice of many,  flung open and business begun.

Micheal Parmigiani's would not accept the fact that the mechanical watchmaking era was about to come to an end.  He could not fathom how great watchmaking inventions, which had a part in changing the world we live in (see longitude blog and Great Kipton Train Wreck Blog), would merely fizzle from a crystal. His vision surpassed many, and out of a stubborn belief in traditional watchmaking, he opened his small but successful watch restoration company and a small workshop, Mesure et Art du Temps, creating original horological mechanical timepieces for collectors.

Micheal and the Sandoz Family met via curator,  Effrene Jobin, of the Watchmaking Museum in Le Locle who had restored many of the Sandoz families collectables.  Mr Jobin was getting old, and the task, for him, had become exceedingly difficult.
This type of work was right up Micheal Parmigiani alley and he worked in close collaboration with the Sandoz family restoring automatons and watches.  Pierre Landolt current Chairman of  the Sandoz Family Foundation, established in 1964 by sculpture and painter,Edouard-Marcel Sandoz,  and Director of Novartis AG, realized that a small workshop for a man so talented in watchmaking just would not do.  Micheal Parmigiani was destined for higher goals.

In  1996 Parmigiani Fleurier  opened -  breathing new life into the Val-de-Travers.  With an intense knowledge of historical horological craftsmanship and mechanical understanding, component by component, Micheal Parmigiani perfected each aspect of watchmaking.   Parmigiani was and still is an independent company with no red-tape restricting perfection, thus Parmigiani can concentrate purely on the mechanics of watchmaking.  He creates completely unique complex masterpieces such as the first ever Parmigiani 30 Year Hegirian Calender (the Islamic Lunar Calender) see below.
Parmigiani Fleurier has created 350 jobs in the region with apprentice opportunities available in virtually all areas of the watchmaking process. For a brand to have a genuine in-house movement, all components must be manufactured by the company.  It is not enough to create a  lovely looking watch and then order a movement from say Swatch's ETA or Ronda (both movement are outstanding in quality).  Every component must be built by the company.

For a small company just starting out, an entirely in-house movement did not happen overnight, but rather component by component.  Over the course of 4 years commencing in 2000, the Sandoz family acquired and founded production companies gathered under the  umbrella of "Manufactures Horlogères de la Fondation" beginning with the December 2000 acquisition of "atokalpa" - a bar turning enterprise producing virtually all movements and the January 2001 acquisition of Elwin - a company specializing in bar turning and machine equipment.  In addition an entirely new company, "Vaucher Manufacture Fleurier" - to service the extremely high quality movements.  A final addition to this group of production companies, Quadrance et Habillage, in December of 2005.

The Many Faces of Parmigiani Fleurier


I came face to face with Parmigiani one cold  eve in November of 2011 dashing through the crowded streets of Manhattan after writing my last exam of the semester.  I desperately needed a place to rest my thoughts. which were still racing from one formula to another. I needed to slow my pace down just a bit. For the last month my mind was focused on exams and I did not know the Parmigiani and the Sandoz Collection was in New York.  A moments decision as to the Avenue I was to traverse led me, by chance, to the door of 781 Fifth Avenue at A La Vieille Russie. I must have fell through the entrance amid a flurry of "no longer required and soon to be shredded" study papers.
In an instant I was transformed into a world of soft light and mechanical marvels.
Immediately, The Hegirian Calender caught my eye  displayed in a prominent position in the center of the room.  My mind still reeling with numbers tried to grasp the complexity of the Islamic Lunar Calender, but the feat seemed harder than any exam I had taken.  I paid my dues and headed upstairs to a world of antique automatons, of which I had never seen before.

Why am I writing about the Exhibition over a year later?  I suppose it is because of Parmigiani's history and the connection I feel to its intense fusion with the mechanical marvels of days gone by.  In this place surrounded by antique timepieces,  delicate decorated birds, bejeweled critters, paintings where scenes change, a gentleman walking on his canes and the rarity of a Faberge egg, every aspect of the automaton in its mechanics and aesthetics were real and present.  They were not illusions or heuristics of our competent mind.  They were not fabricated  beauty and images which fleet across our visual cortex only to remain for a second and then vaporize into thin air.  These objects were there - a testament to fine craftsmanship of artisans long gone.

As Micheal Parmigiani is a restorer of antique mechanical wonders, he has taken some inspiration from the antiquities he restores.  The parmigiani 114 with telescopic hands is one such model, the inspiration drawn from from an 1800 Vardon and Stedmann watch.
Parmigiani also took inspiration from Greek Mythology for an exquisite timepiece - Pocket Watch Leda - read about this watch an exclusive "In the Tick of Time Watch Review"
See Video below I took at the Exhibition.

Parmigiani Timepieces include the Kalpa Collection for the Ladies, of which I blogged about a couple years back  , Tonda 1950 Collection (see image above), Bugatti Collection, the intriguing Pershing Collection which often in tribute to sports like this Captain's Watch for 2010 FIFA South Africa and the awe inspiring Toric Collection which is worthy unto a blog of its own.

Parmigiani Fleurier Watches occupy a unique exemplary niche in the world of haute horology producing testaments of excellence with each Parmigiani  Fleurier timepiece.