The Cricket in Vulcain's Anniversary Heart Watch for Only Watch 2011 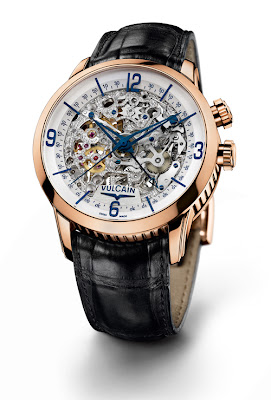 The Only Watch Auction 2011 is an incredible opportunity for  fine watch companies to display a unique watch which incorporates individual achievements pertinent to that company.  For example, Vulcain's Anniversary Heart Watch harbors the Cricket movement - a movement unique to Vulcain's heritage - as well as a skeletonized dial - another Vulcain signature.
If you are unfamiliar with the Cricket movement, it is an alarm function or reminder function specifically designed by Vulcain  for the smaller dimensions of a wrist watch. In this day an age with fancy electronic devices, alarms are taken for granted or even despised. Alarms appear everywhere from $1 digital watches to innovative allusive alarm clocks which actually roll around.  However prior to the quartz revolution, all watches were mechanical and relied entirely on the harmonious sequential functioning of multitudes of working parts.  At first watches displayed the time in increasing precision, then compasses, tourbillons, perpetual calenders, moon-phases, dual time zones and automatic movements increased the functionality and efficiency of the time pieces.  Prior to the early twentieth century, these complications were incorporated in pocket watches, but after Santos-Dumont popularized the wrist watch, pocket watches were laid down in favor of the more handy wrist watch.  Alarm functions were available  in larger pocket watches and with a larger watch case, the capability of producing a louder sound is evident.
However an effective alarm function in a wrist watch was a quite a challenge to develop.  Being that the watch case is small,  it was hard to produce a loud audible gong which would arouse a heavy sleeper from slumber..
An alarm function had three problems within a wristwatch case:
1) Audibility
2) Effecting Dust protection
3) Effecting Water resistance
... then in 1947 the problem was solved and heavy sleepers could rest easy, Vulcain presented the Vulcain Cricket. The Cricket was so loud it could penetrate the dreams and arouse the sleeper. This new alarm function woke up the World of Horology.
So how did Robert Ditisheim of Vulcain resolve the alarm audibility dilemma?  Well as the name suggests, he turned to mother nature. Let me ask you this.  Have you ever tried to fall asleep while a cricket is chirping its nightly song outside your window? Did you hug a pillow to your ear inorder to drown out the noise, but still heard its persistent resonance. AHH! Now you have your answer.
If a tiny cricket could cause such a noise, than surely a wristwatch could do the same. Robert Ditsheim Incorporated a resonance-chamber like that of a cricket by fitting a two-part back to the watch case. The inner back encloses the watch case and serves to generate the sound. A hammer strikes the watch-case ,which oscillates and produces the sound-waves. The outer case has a twofold function: First it permits the sound-generating inner-back to oscillate freely as it has no direct contact with the wearer's wrist. Second it forms a small space between the inner case back which serves as a resonance chamber. Although many Watch Companies have crafted mechanical minute repeaters, none is quite as loud as the Vulcain Cricket.
The Vulcains's Anniversary Heart Watch is a slender mechanical hand wound 12.7mm thick 42mm rose gold case. Being that the watch is hand wound, an oscillating weight (required in most automatic watches) is absent, thereby leaving the exceptionally crafted movement including the skillfully handcrafted main plate, barrel bridge and movement barrel entirely visible beyond the sapphire crystal case back, as well as maintaining the thinness of the watch case.
The Vulcain Cricket sports a 20 second alarm function and a 42 hour power reserve. Ensuring the watch is securely fitted around the wrist, a rose gold buckle is affixed to a black alligator strap.
Posted by Vicky Van Halem at 12:11 PM