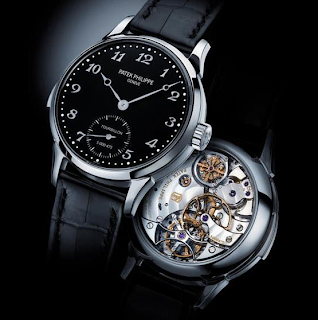 Its Official - the Only Watch Auction, held on September 23rd, 2011 brought in 6.2 Million Dollars (4.5 Million Euros) to raise funds for Duchenne Muscular Dystrophy.
The highest bid went to the the Patek Phillipe Reference 3939A, which sold for 1.4 Million euros (almost 3 times Antiquorium asking Price.) The timepiece's minute repeater tourbillon encased in steel and sporting an enamel dial is the epitome of Patek Phillipe unparalleled craftsmanship.  The Patek Phillipe minute repeater tourbillon powered by a mechanical manual wind movement Caliber R TO 27 PS and COSC featuring two gong chimes activated by a discrete slide piece was up till now only available in platinum and gold making this one of a kind steel version quite unique and desirable. 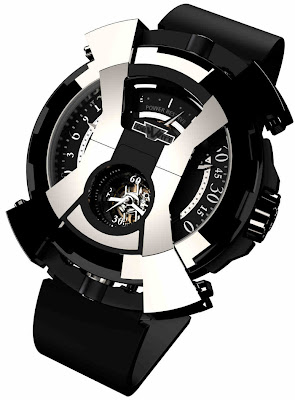 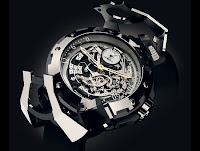 The De Witt No. 3 – X-WatchConcept watch featuring 535 components  was another big sale bringing fetching $558,381 or 410,000 euro.  This is the 3rd of De Witts experimentation and 3rd in-house movement (Calibre DW 4806)with reversible watches - a concept first inspired by a concrete mixer! The unique addition to this latest De Witt creation was the addition of an X shaped "bonnet"  partially obscuring the watch face and sparking ones curiosity as to what breathtaking  mechanism  lies beneath.  Push pieces situated at the top and bottom of the watch case activate the "bonnet" which smoothly opens with measured speed like the sliding doors of a space ship and  exposes the watch face enabling the rotation of Titanium Grade 5 -used mostly in Aerospace, Medical, Marine, and Chemical Processing and is stronger than pure titanium and is distinctive for its combination of strength and corrosion resistance, (Grades 1-4).  Of course the "bonnet" can be shut again.  Although the "bonnet" is partially concealing the dial, the dial sporting a bi-retrograde hours and minutes on either side of the "bonnet" and a toubillon at the lower part of the "X" remains perfectly visible. Another scintillating aspect to the watch is the fact that it is a Chronograph with a patented Automatic Sequential Winding (A.S.W.) device activated by a peripheral oscillating rotor.

The Auction was highly successful as Luis Garcia, directeur dr Recherche at the CNRS said, “Thanks to Only Watch, we are going to be able to finance ICE (a program that was started in 2008),” This program brings together 15 leading teams worldwide who work on therapeutic strategies on Duchenne Muscular Dystrophy, in particular exon skipping, gene and cell therapies.”
Posted by Vicky Van Halem at 12:58 PM