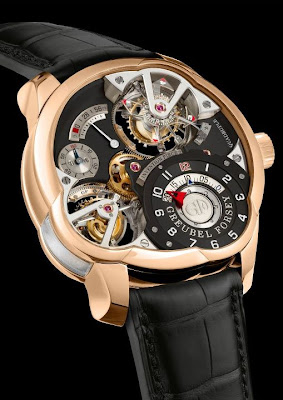 Greubel Forsey won two prizes at the second "Watch World Awards" at the Jaypee Greens Resort in greater Noida, North India. To receive this award, Greubel Forsey Co-founder Stephen Forsey attended the gala event organized by a well known and  most respected Indian  horology publication.  Greubel Forsey won the prize  for “Limited Edition Watch of the Year” for Invention Piece 2, and also an inaugural individual award for Stephen Forsey's “Special Contribution to Haute Horlogerie”.
The P2 is a wondrous timepiece and an asset to the history of horology.  This remarkable timepiece has four asynchronous tourbillons, comprised of two double tourbillons systems presented head to tail and joined by a spherical differential. The time display is located at the 5'o'clock position. Hours are indicated by a red arrow originating from the Greubel Forsey signature logo. Minutes are marked by a rotating disc. Beneath this display is triple mainspring barrels which allows for a 56 hour power reserve in addition to sustaining the tourbillons. Seconds are discretely displayed at the 10 'o'clock and power reserve at the 11 'o'clock. The tourbillons hold the prominent position on the dials bulging out into the bezel as if the case alone cannot contain their memorizing rotations.
Tourbillons were originally invented in 1795 by Abraham-Louis Breguet to eradicate the effect gravity had on the functioning of the pocket watch. Greubel Forsey has decided to focus on Tourbillons - an extremely complicated function. In a Tourbillon the entire escapement assembly ,comprising of the balance wheel, the escape wheel, hairspring and pallet fork, rotates within a cage.
As Steven Forsey Said, " We chose to concentrate initially on tourbillons as we felt that as there had been relatively little experimentation and innovation in that field in relation to wristwatches, we had a good chance of discovering and contributing something new."

Greubel Forsey has achieved greatness in the horological world by pursuing the science of invention just as the great thinkers of the past centuries. This greatness was acknowledged by an an international panel of judges including renowned Swiss watchmaker Antoine Simonin.  Greubel Forsey's success is not random by any means - read an excerpt from my 2010 blog ,below the You Tube clip, briefly  describing the experimental design of the companies quest for perfection.
Stephen Forsey words in regard to his double win “It’s very exciting for Greubel Forsey to be in India and to receive these prestigious awards from the biggest specialist magazine, Watch World.”

Extract from Blog I wrote before Greubel Forsey first appearance at SIHH 2010.

Greubel Forsey has made great strides in the realms of complicated watches by inventing and reinventing new ways of complicated time display. Last year the Quadruple Tourbillon (image above) was awarded "Best Complicated Watch" at the Grand Prix d'Horlogerie Asia. Two other great achievements include the 24 Second Inclined Tourbillon and the Double Tourbillon 30°
Robert Greubel and Stephen Forsey success is partly due to their methodical scientific approach to the process of watch making. Striving for perfection can potentially lead watch manufacturers on an endless quest, without a specific goal in sight. This prompted Greubel Forsey's introduction of its innovation platform - Experimental Watch Technology or EWT. This empirical approach utilizes experimentation and resulting data to determine the performance of the watch whilst manipulating different variables and verifying the unknown. This approach is time consuming, but extremely effective, and provides Greubel Forsey with a definite edge in watch technology.
EWT has provided Greubel Forsey with the tools to formulate new inventions, two of which are currently in the works: The Binomial, and a cutting edge isochronically stable material used to craft the balance and the spring as well as a spherical Equality Differential harboring its own energy reserve that can offer a constant force to the oscillators.
However, scientific approach cannot vouch for the undeniable aesthetic designs and superb finishing of their timepieces. That aspect is acquired by creative minds and exceptional experience.
I look forward to Greubel Forsey first appearance at this years SIHH commencing on Januar
Posted by Vicky Van Halem at 3:12 PM