Montblanc Villeret 1858 Pulsographe For a Physicians Use 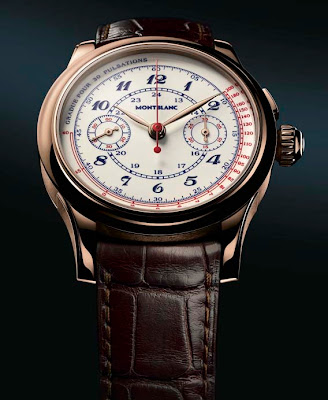 Montblanc's contribution to the Only Watch Auction 2011, held tomorrow in Monaco to raise funds for the research and treatment of Duchenne Muscular Dystrophy, is quite relevant indeed. Beyond the bezel of the lower portion of the watch is a Pulsographe. A Puslographe is a vintage scale on a timepiece, usually displayed in red, which was used in conjunction with a chronograph and reduced the amount of time a doctor was required to check the pulse of a patient. The Pulsographe was most helpful in World War I, when a doctor had many soldiers wounded in battle and a limited amount of time. For instance in a pulsographe calibrated for thirty pulse beats, like the Montblanc Villeret 1858 Pulsographe, a Doctor would feel the pulse of the patient and at the same time depress the chronograph button. He would then count until thirty beats and stop the chronograph. The chronograph hand would point to the patients pulse per minute on the pulsographe scale.

The first watch to have this feature was the Heuer Pulsographe. It was when Charles-Auguste Heuer, son of Edouard Heuer founder of E.Heuer & Compagnie" went to visit his doctor. The Doctor checked his pulse for the usual 60 seconds. This procedure was slow and often prone to inaccuracies, Charles-Auguste Heuer decided that he could invent a better more efficient way to measure a heart beat. He set to work and in 1908 invented a Sphygmometer Chronograph. This Sphygmometer could measure the heartbeat with greater reliability. (Is the Montblanc then a Sphygmometer?) This Sphygmometer was too costly as a result of the chronograph function, and thus he developed a Pulsographe, which had the scale but no chronograph function. 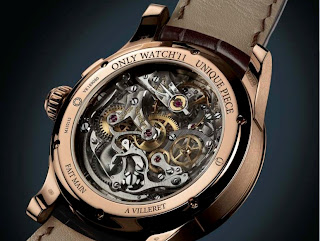 The Montblanc Villeret 1858 Pulsographe will sit well around any doctor's wrist. An 18k gold 39.5mm case is a mere 12.1mm thick and protects a chronograph calibre MB 13.21, which is entirely visible via a Sapphire crystal case back. The hand-decorated components are polished and finished creating an eye catching performance of precision. The plates and bridges are crafted in rhodium-plated nickel silver. The bridges themselves are embellished with bevels that have been manually polished.
The enamel dial sporting Arabic Numerals reminiscent of vintage medical calibration machines; a red Pulsographe scale calibrated to 30 pulse beats, as well as the finely placed sub dials are protected beneath a domed sapphire crystal . At the 2 '0' clock position, a chronograph pusher executes the chronograph function as well as stops and resets it.

Montblanc has portrayed its commitment to fine quality, precision and finishing in its Only Watch 2011.
Posted by Vicky Van Halem at 2:02 PM

Email ThisBlogThis!Share to TwitterShare to FacebookShare to Pinterest
Labels: Montblanc, Only Watch Auction