Rushing through busy streets late for an appointment, I scanned shop windows with practiced efficiency.  All of a sudden a glittering row of something something caught my eye.  I skidded to a halt - much to the exasperation of rushing New Yorkers.
"Hey Cool!" I said, "What do we have here?"
The sparkling something somethings were actually a row of gem smothered iced out G-Shocks - Ka Ching.  The ultimate "must have" in Hip Hop Watches - a "Jacob & Co" type image for a fraction of the price.  So who has been seen with a G-Shock?  Lil Wayne was spotted in a Casio/Babe G-Shock DW-6900 Limited Edition Watch at a Miami Heat and Dallas Mavericks game 2 of the NBA finals , Eminem sports a black on black G-Shock 7900B-1 in his latest album Bad Meets Evil. Kanye West wears a G-Shock and so does Chris Martin. 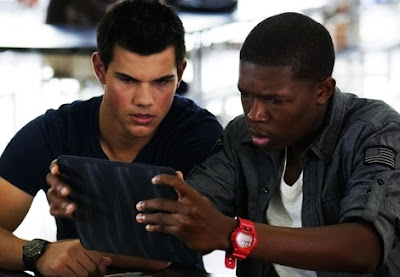 But G-Shock is not only a Hip Hop Watch, you will find the incredible G-Shock Watch around the wrist(s) of Thai model and actor, Mario Maurer and don't be surprised if you spot Denzel Whitaker sporting a fiery red Casio G-Shock in the "now playing in theaters everywhere" movie Abduction.

For more hot celebs wearing G-Shock Watches read my prior G-Shock blog.
These lil beauties are surely image makers (or breakers depending who you are).  G-Shock is a hot ticket Urban Trend Item - gaining popularity and presence.
Posted by Vicky Van Halem at 1:57 PM