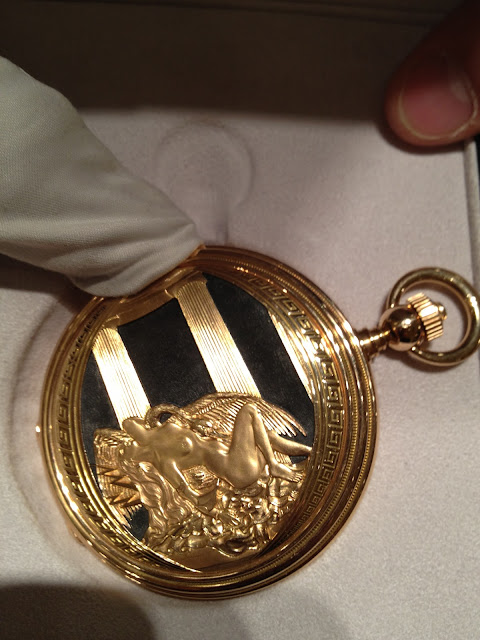 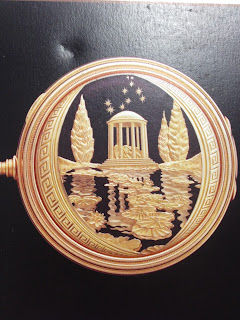 Perfectly fitting into ones palm, the $950,000 Parmigiana Pocket Watch Leda is a passionate depiction of Leda and the Swan. To understand this one-of-a-kind timepiece, one must surely know this tale from Greek Mythology. Leda, the wife of Tyndareus, King of Sparta was seduced by Zeus,  ruler of the Olympians of Mount Olympus.  He came to Leda in the form of a swan.  The swan fleeing an eagle,  fell out of the sky and into the protective  arms of Leda, where they lay. Two eggs resulting from this union bore two immortal children,  beautiful Helen of Sparta and Polydeuces, as well as the mortal children ,Castor and Clytemnestra, born from the union of Leda and her husband, King of Sparta,on that same night. This striking image of Leda and the Swan intertwined in a passionate embrace  has been reproduced by many great artists and sculptures.   16th century artists like  Michelangelo and Leonardo da Vinci captured the sensual languidness  of Leda and her Swan many years before depictions of humans in union were permitted. 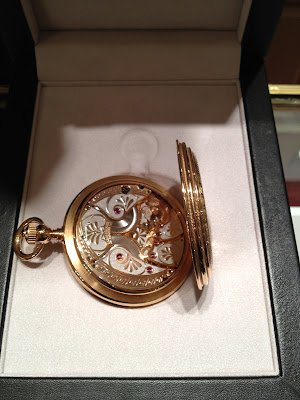 Parmigiani Fleuerer is reawakening Greek Mythology by creating exquisite one-of-a-kind timepieces representing tales from the time of the Titans and Olympians. The powerful images evoked by these tales serves as the perfect manifestation of artistic expression.  Thus it is no wonder, Parmigiani Fleurer chose the passionate theme of Leda and Her Swan to grace the surface of the 65mm 18k rose gold unique timepiece. Engraved by hand, Leda and her Swan, lie against the backdrop of majestic Gold Greek Pillars rising in an onyx night sky. Turning the watch over, one seems to take a step back and view Leda and Her Swan within the temple flanked by trees at the edge of a rippling pond filled with water lilies.  The entire scene is reflected in the pond. Above the temple hover a constellation of stars, Gemini, which is said to be the result of Polydeuces' request to Zeus to immortalize he and his twin brother, Castor,  so that they may remain together forever. 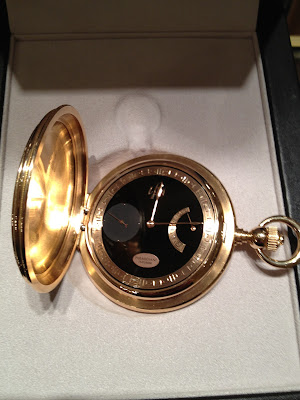 The unique number 2028 is engraved on the case back. The dial cover is opened via a push piece combined with a crown set baring genuine sapphire cabochon. The Greek key symbol rings the dial representing  infinity and unity.  This labyrinth type depiction adorned Greek Temples and was the most important symbol in Ancient Greece - a powerful reminder of Greece's formidable presence.  Beyond the "Greek Key" border,  upon the perfect blackness of the onyx dial, the 12 'o'clock position is indicated by the Greek Symbol for twelve  "ιβ" or iota + beta = 10 + 2.  The 8 day power reserve indicator occupies the 3 'o'clock position.  Parmigiani Fleurier oval trademark cartouche marks the 6'o'clock position.  Javelot shaped hands deeply rooted in Greek Mythology pay tribute to the "The Crown Games" or Olympics, where a Javelin was thrown as far as possible in display of strength and precision.
The openings of both covers and movement are in an oval shape representing the eggs from which the children were born.
The hand wound in-house calibre 24''' PF170 movement beats at a frequency of 18,000 vph. 29 jewels accentuate the exquisite two tone rose gilded and Rhodium plated hand engraved bridges inspired by Greek flora. The "Greek Key" - shaped from a continuous line surrounds the movement to form the egg shape.
The pocket watch is delivered with an 18-carat rose gold pocket chain.

Micheal Parmigiani, founder of Parmigiani Fleurier (Fleurier being the place of its headquarters)  utilizes his integral knowledge of his restoration of mechanical marvels of the past and adapts them to his current timepieces. Many unknown watch makers whose names have been lost by the passage of time, are being honored by their ideas in Parmigiani incredible timepieces.