Now Tiffany & Co. responded by filing a counterclaim for 541.9 million Swiss Francs.
Swatch responded by claiming that the counter-claim has no factual or legal basis and will be vigorously contested by Swatch Group and Tiffany Watch Co. Ltd.


It was supposed to be a match made in heaven.  Read Swatch Group  enthusiastic 2007 announcement:

In December 2007 Swatch Group and Tiffany & Co. announced a strategic alliance to further the development, production and worldwide distribution of Tiffany & Co. brand watches. Under the agreement, the new watch company, known as Tiffany Watch Co. Ltd and wholly owned by Swatch Group, will design and manufacture in Switzerland a complete range of high-end luxury watches.
The enormous prestige of the Tiffany & Co. brand and the Swatch Group’s watchmaking expertise and experience in the luxury segment form a powerful platform on which to build one of the world’s top luxury watchmakers.
Tiffany Watch Co. Ltd is a Swiss company. Its products are designed and manufactured in Switzerland and distributed selectively through Swatch Group and Tiffany & Co. retail distribution networks, including monobrand Tiffany & Co. watch boutiques in certain markets outside the United States. 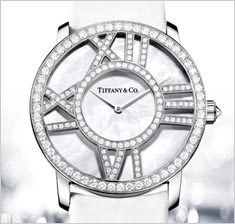 After this case came to light I scanned the selection of Tiffany & Co. timepieces and was quite startled at their obvious lack of luster.  No single watch design stood out as being unique or special.

After further contemplation, I realized there collection does not appear to be the  high-end luxury watches as expressed in the original Swatch 2007 statement.
As for the design, it is not like there is lack of talent in the world of watchmaking.  At Baselworld 2012, we were presented with incredible creations from hundreds of watchmakers, but Tiffany & Co. watches seem pale in comparison to most other watch companies out there.
I mean many watch blogs don't even bother blogging about their watches anymore.  Once in a while I do scan their website hoping for that signature watch.  A watch with a definite Tiffany & Co. signature.

Recently I did notice a lovely Floral Diamond Cocktail watch available at Tiffany & Co. for a  $125,000. An astounding $100,000 plus over the price range of their other timepieces.  A platinum case and bracelet adorned with 1,015 brilliant cut diamonds weighing 14.51 carats.  A diamond flower - very pretty -  rests atop a hatch which opens to reveal the time.  The time powered by a quartz movement. As lovely as it is, it's still  missing a certain flavor.  The flavor that is Tiffany & Co.

But something keeps nagging at me, Tiffany has had more to do with watches than one thinks. A lot more.   Tiffany has had connections with no other than horological king Patek Phillip since 1851. Maybe the passage of time has blurred this connection, but it is still solid.   In 2008, Patek Phillip opened a 3000 square foot exclusive salon within Tiffany & Co. flagship store on 5th Avenue in NYC. And this salon is not just a show case with a couple of watches, this salon presents some of the watchmaker's unique and most sought-after timepieces, a collection of all current models, an extensive library, individual customer consultation areas, and a studio for on-site repairs.

The partnership between Tiffany & Co and Patek Phillipe is intriguing to me. To better understand this connection Read "Bejeweled by Tiffany" 1837- 1987 by Clare Phillips of Tiffany & Co.

Email ThisBlogThis!Share to TwitterShare to FacebookShare to Pinterest
Labels: Tiffany and Co.