When ships were the only way to cross the seas and the voyage was treacherous, many lost their lives simply because they became lost. On October 22, 1707, four British Men 'O War sank just off the Cornish Coast, 2000 men were lost, because they did not know their longitude.
Finding a precise timekeeping instrument was a matter of life and death. (read about the Longitude Act  of 1714) 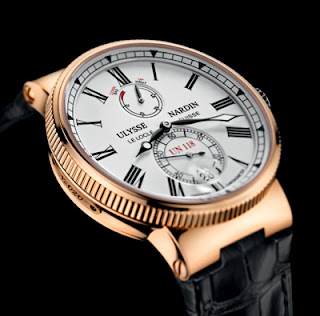 In the current economical ebb and flow finding a perfect time keeping instrument has more to do with the success of a company than "Men 'O Wars" sinking off coastlines.  In today's treacherous sea of competition, finding the perfect timekeeping instrument will ensure companies stay afloat. Now you may be wondering why I am stressing sea terminology, I mean this is not a nautical blog, but when it comes to reviewing a Ulysee Nardin Watch, my mind immediately takes to the open sea.  - Read about the role Ulysse Nardin played in the success of Marine Chronometers. 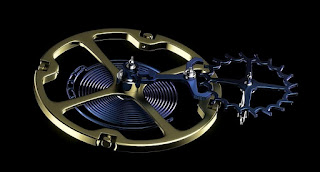 Now Ulysee Nardin has embarked on another voyage with newly appointed Patrik Hoffman at the helm.  Ulysee Nardin, the first brand to introduce components made from artificial diamond grown on silicon or DIAMonSil, unveiled its groundbreaking in-house Caliber UN-118.  Aside for this movements model of timekeeping efficiency,  thanks to the constant innovation efforts of Ulysse Nardin and Sigatec (Sion, Switzerland), Caliber UN-118 can be produced on a large enough scale to power 70 percent of its watches.  Sigatec is one of the most technologically advanced companies in terms of nanotechnology with the capability of creating watch components in both Silicium and DIAMonSIL.

The movement is a certified Chronometer (not to be confused with a seafarers instrument - difference explained below ) and is equipped with a  power reserve of 60 hours.

After many years of hearing about watch components comprising of Silicium and Diamond on Silicon, it is a true breakthrough to finally see this groundbreaking technology used prolifically.


Distinction Between Marine Chronometer and C.O.S.C.

A Marine Chronometer is not the same term used for a Chronometer today -A "chronometer" in today's term is a high-precision watch capable of displaying the seconds and housing a movement that has been tested over several days, in different positions and at different temperatures, by an official neutral body (COSC).
Each movement is individually measured. Any watch with the denomination "chronometer" is provided with a certified movement by the Contrôle Officiel Suisse des Chronomètres, the Official Swiss Chronometer Testing Institute or the C.O.S.C. All of Ulysse Nardin's Timepieces which carry the title Chronometer have been tested by the C.O.S.C and given the title of Chronometer.