Harry Winston and the Missing Diamond 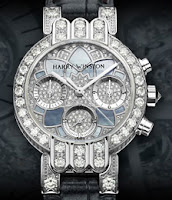 Harry Winston, the founder of the legendary company was born in Los Angeles. His father was a small retail jeweler stemming from many generations of jewelers. At 16, Harry Winston helped his father in the shop, and then at 21 he felt he was ready for New York City. He started with $2,000 and quickly built a reputation for himself buying historic diamonds such as the famed Vargas Diamond and the Jonkers Diamond (stay tuned). He was full of courage, determination and high intellect. He sold diamonds to royalty and movie stars. Marylon Monroe referenced Harry Winston in "Diamonds Are a Girl's Best Friend".

He recognized his fortune in his smaller customers who bought small engagement rings with hard earned money. "But most of our business is in the lower-price field." he said in a1949 interview " We have stones for as little as $2 . The average engagement ring in the country is a quarter-carat, retailing between $100 and $15o. That's the biggest part of our trade"

An interesting occurrence happened when a journalist was interviewing him regarding the Hope Diamond  Harry Winston was seated at a long velvet-topped table. Before him lay four trays containing the jewel collection of the late Evelyn Walsh McLean. Nearby on a stand hung the 44 and a half carat Hope Diamond and the famed Star of the East Diamond. Suddenly, Harry Winston's demeanor changed ever so slightly; although still quite relaxed. he said,

" There's a diamond missing, the little five-carat one"

Harry Winston searched through the gems as the journalist shuddered.

"Ah, here it is" Harry Winston said as he plucked the five carat diamond from under an elaborate ring setting, "Funny," he continued seemingly unaware of the journalists relief, "I can tell in a second when one's missing. Works unconsciously."
The journalist still troubled by the almost disappearance of the diamond inquired as to what would happen if the diamond would have vanished,
"Well for one thing," he said, "I might press this little button near my table . The police would surround the building in just a few minutes."

Then Harry Winston recalled the harrowing day when his elbow inadvertently knocked a $125,000 diamond into the waste paper basket near his desk. The entire staff had to search through all trash receptacles and about 1500 paper packages. It was like searching for a needle in a hay stack and the staff all very nearly had nervous breakdowns. Finally, after 3 days, the diamond was discovered in a trash can outside the building waiting for the garbage truck to come haul it away. Since that day, Harry Winston made a rule that all garbage must be kept in the building, just in case.