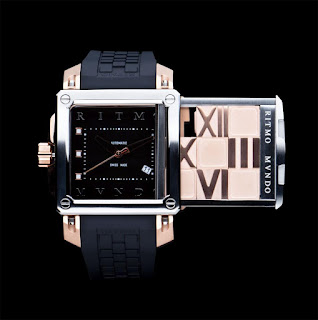 Don't be surprise if Ritmo Mundo timepiece brings sudden flashes of childhood party bags and sticky fingers. This is probably due to the fact that Ritmo Mundo fashioned its sliding puzzle watch after the party bag game.  The game slides in and out of a sleeve masking or displaying the watch face. In addition the actual "game" is functional.   The sliding puzzle watches typically sell for $5,500.00 and up depending on the model.
The Puzzle timepiece ,unveiled in 2010, is a signature Ritmo Mundo timepiece.  The company has added to the Puzzle collection in different color combinations and gem encrustation.

What is the inspiration for this timepiece?  President and Founder of Ritmo Mundo, Ali Soltani,  found inspiration in architecture "and by the limits which they can be joined" and of course the childhood sliding puzzles. 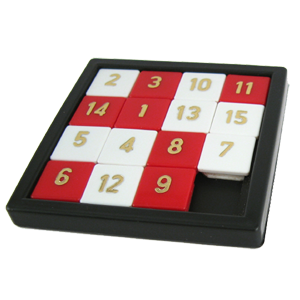 Timepieces manufactured by California based Ritmo Mundo  have a trendy fashionable appeal with  unique designs making them attractively distinct.  The timepieces exude a definite bold flair influenced by its Italian Origin. Being Beverly Hill based, Ritmo Mundo has attracted a host of celebrities who once hooked become instantly "Ritmotized" - the companies name for it. The string of celebrities donning a Ritmo Mundo timepiece range from Terry 'O Quinn of "LOST" fame to Sylvestor Stylone and Samuel L. Jackson.  Tyra Banks known for her excellent taste in attire wears one too. Ritmo Mundo has licensing agreements with many HBO award winning series like "Entourage" and "Sex and the City".

Beneath all the glitz and glamor of the timepiece beats a very good movement.

The watch is equipped with a Swiss Sellita SW 200 Automatic movement, which by all means is as good as an ETA movement. Sellita is an independent company  founded in 1950  which exclusively assembles Swiss made mechanical watch movements. In 2003,  Sellita decided to develop and produce there own mechanical movements.   The SW 200 was the first movement introduced to the market with excellent results.   Watch companies who want watch movements comparable to the precision and efficiency of ETA movements use Sellita movements. Since 2010, Swatch group, for the most part, has slowed the supply of complete  ETA movements to watch companies not owned by the Swatch Group making it impossible for small privately owned watch companies outside of the Swatch Group to purchase an ETA movement. The Sellita is almost a copy of the ETA 2824.  The main difference is that it has not been around nearly as long as the ETA 2824 and thus has not been naturally tested for longevity.
ETA has contracted Sellita to make  their movements under the ETA brand. So one may actually be wearing an ETA movement assembled by Sellita.
Many companies avoid the movement debate by simply stating the movement is Swiss made; however Ritmo Mundo clearly states that the movement within its Ritmo Mundo sliding puzzle is a Swiss Selita SW 200.

In just 10 years, Ritmo Mundo has achieved great strides in contributing to the watch industry.  One of its most intriguing collection is the Persepolis Automatic Collection which demands a blog of its own; however my own childhood memories of sliding puzzle games fueled by desire to blog about the RITMO MUNDO PUZZLE first.