The Origins of The Eterna Logo 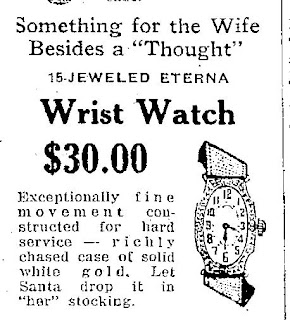 One can never mistake an Eterna Watch. On the dial are five dots below the 12 'o'clock. But what are the dots? Do they mean something? Why did Eterna choose a seemingly random dot pattern?
Eterna's logo hints at a certain technological improvement to a certain watch movement. Read more and you will find out.
In 1856 Eterna began strictly as a company manufacturing blank movements. Not unlike hundreds of such watchmaking workshops dotted around Switzerland. In time Eterna's supreme quality of work became widely recognized. Urs Schild, who co-founded the company with Dr Josef Girard, had a vision of producing a watch from start to finish . Thecompany bore the name of Schild Fréres, and manufactured small ladies wrist watches adapted from pocket watches. In 1905 the company changed its name to Eterna. By 1925, Eterna watches were 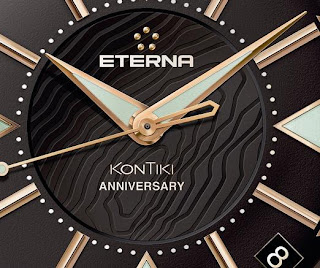 being advertised in US newspapers such as the Southtown Economist 12/01/1925. By then Eterna had made history. In 1914, at the Swiss National Exhibition in Bern, Eterna intro
duced the first alarm wristwatch - 6 years after Eterna had patented it. Eterna watches were coveted for their slimness and precision. In 1930, Eterna unveiled the smallest Baguette Calibre
Watch, which was manufactured in series production. Still no logo marked the dial. However in 1948 Eterna's dial would change forever. The logo marks a huge technological milestone unveiled in 1948. Eterna introduced the Eterna-Matic which comprised of a low friction ball bearing used to support the rotor of the automatic movement. This led to a great increase in the efficiency of the rotor. The invention of the Eterna-Matic with its ball bearings had such an overwhelming effect on Eterna, it fashioned its logo after five ball bearings.
The five ball bearings grace every dial of an Eterna timepiece.
Posted by Vicky Van Halem at 4:16 AM