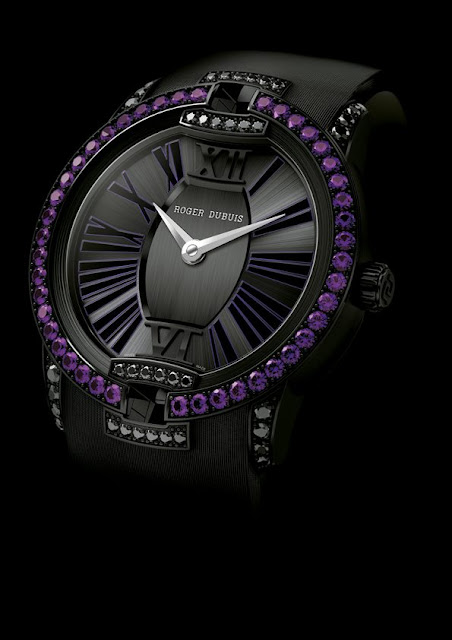 Roger Dubuis releases a passionate collection of ladies watches - The new  Velvet Collection.  The piece resembles a cascading evening gown accentuated by fine jewels.  The Velvet Amethysts and Spinels piece, of which only 188 shall be available, exudes a royalty of character emphasized by the color combination of rich deep purple and shimmering black.  The purple is due to the rich color choice of the purple amethyst and purple Spinals.
If you are not familiar with the term Spinal, don't be to disheartened, Spinals are precious gems in themselves - thought to be part of the Corundum family.  The red spinals are often confused with rubies, but in fact are quite different stones. Spinals are found in a variety of colors - the red and cobalt blue spinal.  The purple color spinal owe its hue to iron and chromium.  Spinals require very little treatment as in nature they are flawless and transparent. Amethysts and spinals have slightly different refractive indexes creating a mysterious -almost unconscious - perception of contrasts on the bezel.  A 36 mm black titanium and DLC case exudes a subtle sense of power.
The dials, numerals and applique darken beneath a coating of DLC (Diamond Like Carbon). However DLC is not merely to set the mood -  turn down the lights (if you know what I mean) .  A surface treated with DLC increases its hardness to that of Sapphire and 5 times that of steel.  DLC increases the scratch resistance, durability and resilience of the surface as well as reducing friction.  The dial further plays with the light by utilizing a black brushed sunray effect surrounded by purple elongated Roman numerals. 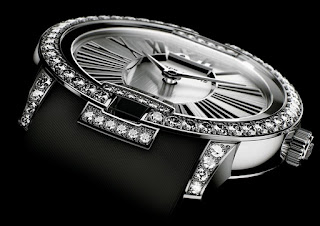 This model is also available in white gold smothered in no less than 100 diamonds totaling 1.77 carats. (left inset)
With gratitude to Roger Dubuis, the New Velvet Women's collection is powered by a Roger Dubuis in-house RD 821 automatic mechanical movement. The movement was designed, developed and produced in-house.


A signature mark of this new collection is the bejeweled lugs which fit smoothly into the case making the transition between watch case and strap not a transition at all, but a seamless flow of elegance.
This model fulfills the new requirements for the Geneva Seal, a feat of which only a handful of watchmakers have achieved.  To date Roger Dubuis - the first watchmaker to meet the new criteria for the Geneva Seal- is the only watch manufacturer to have 100% of its new watches to reach the demands required for the new “Poinçon de Genève”.  Click here to read about the new “Poinçon de Genève” requirements.
Amethyst Greek Mythology:
This timepiece has an alternative function other than creating an image of exalted elegance and precisely indicating the time.  Alternative function that is if you relate to Greek Mythology.  The Ancient Greeks believed the amethyst had the power to prevent drunkenness.  Even the word amethyst is derived from the Greek word - "amethystos" -  "not drunken".  So pertinacious they were in their belief, they even had wine goblets crafted in amethyst. In Greek Mythology the young maiden, Amethystos, was insistently pursued by the god of drunkenness and wine ,Dionysis. She refused his advances and prayed to the gods to remain chaste.  Her prayers were answered by the goddess Artemis who transformed Amethystos into a white stone. So taken by Amethystos's fervent wish to remain chaste, Dionysus poured wine over her white stone as an offering.  The wine dyed the crystal purple.
Posted by Vicky Van Halem at 12:25 PM