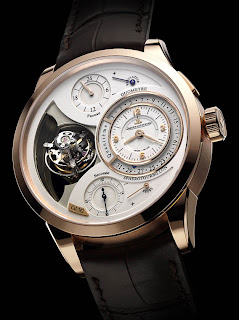 This year's SIHH 2012 is indeed a complicated one, which in this case is a very good thing.  I remember the apprehensive SIHH 2010 show - slightly dampened in the wake of an uncertain economic climate. Many watch companies dwelt within the security of its well known popular collections.  There was little temerity and cheaper steel versions were favored over precious metals.     In 2010,  I found myself scanning the horizon for the exorbitant intricate grand complications - which existed - but were far fewer than the previous years.
The SIHH 2012 is flooded with complications, a testament to the more positive outlook of the luxury watch industry as a whole possibly due to the recent growth in the demand for luxury items in India and China.
Companies have not only released complicated watches, but  Grand complications, which are horological masterpieces created to represent the superior watch making capabilities of a particular company.

A Grand Complication must have at least three complications to achieve the title such as the famous Patek Phillipe Sky Moon Tourbillon .

One fine example presented at this years SIHH  by Jaeger LeCoultre is the profoundly exquisite and exceedingly complicated Duomètre á Sphérotourbillon encompassing a multi-axis tourbillon. - view video below.

Email ThisBlogThis!Share to TwitterShare to FacebookShare to Pinterest
Labels: Jaeger-LeCoultre