Perrelet Turbine a Proud Hallmark of its Founder's Invention 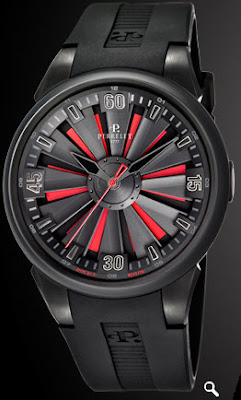 Beneath the hands of the Perrelet Turbine and above the dial backdrop, often decorated with a eye catching motif, a representation of a Turbine spins back and forth.

The blades swivel creating constant motion on the dial,  and is the front component of a new take on Perrelet's original "double rotor" Collection.
Perrelet utilized the original "double rotor  calibre (Perrelet P-181), patented in 1995,  for the Turbine Collection. The Perrelet P-181 is fixed with two rotors, one on the dial and the other on the case back. The rotor on the dial is a moving testimony to the horological break through invented by Perrelet's founder Abraham Louis Perrelet in 1770. He invented the self-winding concept, whereby the motion of a person can wind  the mainspring thereby providing energy to power the watch. This is what is known as an automatic timepiece.

At BaselWorld 2009, Perrelet unveiled an entirely new dimension of the "double rotor' by drawing inspiration from the field of aeronautics.  The Turbine Timepiece has quickly become the companies signature model, not because of its highly complex complications, but for its popular attraction. 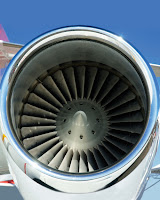 I have often wondered why the idea of a Turbine prompted Perrelet's design of its collection, but in actual fact it stems from clear rationality. A turbine is a rotary engine which transforms energy from a flow of matter and converts it into useful work. (Source: Wikipedia) The premise of transforming undirected naturally occurring energy into useful work is both that of the Turbine and the Rotor, thus the depiction of the Turbine on dial of the Perrelet is nothing short of brilliant.  Not only is the idea brilliant, but entirely captivating, which accounts for the enormous popularity of the Perrelet Turbine collection. Of course there are many types of Turbines.  The stark slender wind turbines which congregate on open fields using wind to create electrical energy to the highly complex steam turbines used in nuclear power plants.  In designing the Perrelet Turbine timepiece, Perrelet drew on the field of aeronautics and the powerful gas turbines used in planes. 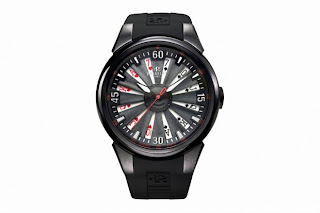 Perrelet has introduced many Turbine Models created to suit many tastes.  Perrelet did not change its movement, but rather substituted a rather plain looking dial side oscillating weight with memorizing blades, providing eye catching movements and changing bands of color and design every time the wearer moves his arm. Perrelet used its tried and tested double rotor movement Perrelet P-181 to make what was good even better, and it worked. It worked to such an extent that the Perrelet Turbine has infiltrated beyond watch aficionados to the general public just like the Rolex Oyster's, Cartier Roadster, Audemar Piguet Royal Oaks and IWC Portugeuse.  This is the type of design watch manufactures clamber for - a design that will thrust them into the limelight and hang on the lips of the "man on the street". 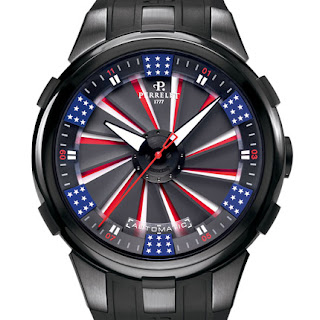 Perrelet has taken its design an slightly adjusted it in size and color to suit the taste of the watch wearers. For example the TURBINE XL is recognized by its roomy 50mm case and Turbine XS is measured at a diminutive 41mm. Perrelet Turbine is extremely versatile in that it does not alter the dial in any way, but rather moves above it -like actors against a backdrop where the scenes change at the whim of the director. Perrelet has indeed used a variety of scenes to create Special Edition Collections. The Turbine poker adds a sense of excitement to the watch dial and The Turbine America a sense of patriotism. The Turbine Playing with Fire is burning hot (can you wear it on your wrist). The latest embraces Manga in its Turbine Erotic Limited Edition and is for eyes 18 years and older.

Below is a You Tube Clip of the Perrelet Turbine in action.