The Influence of Harry Winston Project Z1 on the Latest Ocean Chronograph Models. 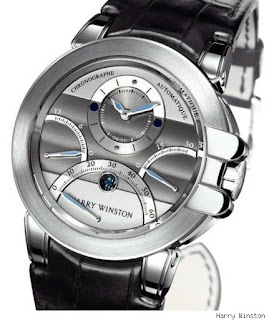 Harry Winston's latest addition to its vastly popular Ocean Collection, adds an underlying ruggedness to a sleek elegance. One only has to have a quick look from Harry Winston's Ocean Chronograph Watch (left) to Harry Winston's Project Z1 (see below) to see an unmistakable likeness. Unveiled in 2004, the Project Z1 hailed in three groundbreaking firsts: 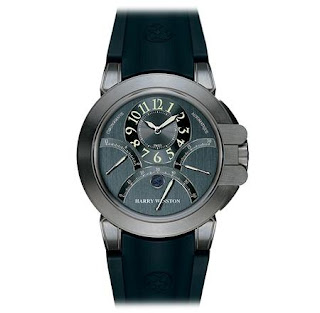 1)The Watch Material: Zalium, previously used exclusively in aerospace technology, has become a trademark of Harry Winstons for its use in jewelry and luxury watches. Zalium ,an alloy of aluminium and zirconium, is hypo-allergenic, resilient, corrosive resistant and harder than titanium and has a gun metal type finish.


2) Automatic chronograph movement with off-centered triple retrograde display is a prominent feature in the latest addition of the Ocean Chronograph Watch. 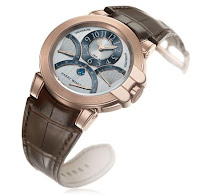 white gold), there is a tiny "porthole" at the very top of the minute retrograde arc, where one can perceive a seconds hand.

The newest addition adds a darkened streak across the watch like a band of freshly plowed snow (yes, I admit, the image of plowed snow is on my mind, as I do live on the East Coast), and exudes a sense of adventure. For a quieter elegance, the Ocean Chronograph crafted in 18k rose gold is an exquisite alternative. Poignant blue sub dial outlines add unmistakable distinction to a watch well worthy of recognition.