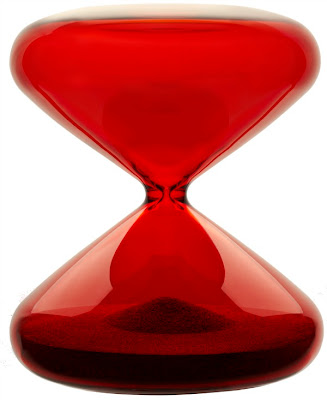 "Within the dim confines of a mad scientist's underground lab, atop a table crafted from alabaster, a blood red Ikepod hourglass marks the time. As your eyes adjust to the faint flickering light cast by low burning gas lamps, you can just make out that the stuff within the hour glass is not really sand at all. But what is it? What substance is marking the minutes in this dark dusty dungeon? You edge closer, ever so careful not to tread on the strange exotic markings etched onto the floor and glowing a faint green. As you pass the markings, you feel a slight tingle as the hair on your legs stand on end; however, you do not notice, you are transfixed by the hour glass. The hourglass vibrates just a bit, and then ever so slowly turns over. Now you know what black substance flows within the hour glass. Now you know. Within the hour glass black micro balls fall through the tiny constricted space keeping perfect time. The movement of the balls mesmerize you as you notice the curvature of the glass slightly distorts the nano balls within. The gentle rustling enchants you and you must have this magnificent piece of ancient timekeeping. But a certainty hits you like a ton of bricks. There is but one blood red Ikepod hourglass. But one. However, the Ikepod Hourglass is very much for sale at The Only Watch Auction by Antiquorum held at the Monaco Yacht Show this coming September, and if you purchase the Ikepod Hourglass know that the proceeds go to a very good cause. A very good cause indeed. The proceeds go to raise charity for medical research of Duchenne Muscular Dystrophy."

Ikepod by Marc Newson, is the only company that sells very high end hourglasses. These hourglasses, exquisitely sculptured from a single tube of borosilicate industrial glass, range in price from $13,000 to $40,000 depending on the size. Marc Newson's creations are available in two sizes. The larger ones are 300mm height, 250mm width, and 9.6 kg in weight and the smaller versions are 150mm in height, 125mm wide and 1.5 kg in weight. The price also depends on the nano balls. Some are made from steel or black colored steel, others in copper and still others in gold. The hour glasses containing the gold nano balls are only available in very select locations. The Ikepod hourglasses are wonderful examples of functional art measuring time one hour at a time (larger version) or 10 minutes at a time (smaller version).

A Touch of Hourglass History
The use off hourglasses was first mentioned in the 14th century, used in work shops to determine if sufficient time had past in tempering metal, and then later as "sand glasses" on naval ships to measure 30 minute increments of time. This "hour glass was known as a "watch glass". In the following centuries hour glasses were used to measure speed of sea vessels. A log was tied to a rope. The rope was knotted at regular intervals of about 47 feet (14.3 meters) long . Once the log was thrown overboard, the rope attached to the stern rail did not move much while its attached log line trailed out from the moving ship. After 28 seconds, the amount of knots that had passed overboard was counted. The number of knots that ran out in 28 seconds was more or less the speed of the ship in nautical miles per hour. An hourglass was used to measure the seconds that passed. The term "knots" is still used as the speed measurement of nautical miles. Knots now refers to one nautical mile an hour or 1.15 miles on land. Today hour glasses are used in board games such as Pictionary or boggle, or in the kitchen as "egg timers" or as exquisite artistic functional creations by Ikepod.