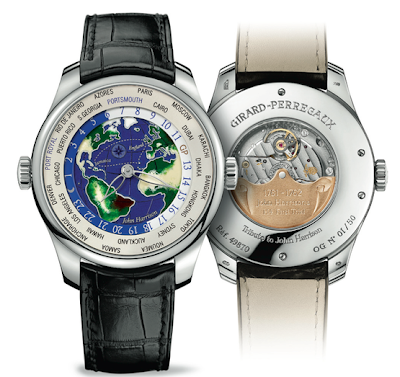 Girard-Perregaux ww.tc John Harrison pays tribute to the monumental strides made by
JOHN "Longitude" HARRISON and his lifelong quest to find longitude.

A champlevé enamel dial displays John Harrison's son William's Atlantic Ocean route from Portsmouth, England, to Port Royal, Jamaica and back. This is the precise route traveled by John Harrison’s son William to test the reliability of the H-4 watch.
The incredible detail on the dial was achieved by first engraving the outline of the map on a plate of white gold and then filling it by hand with enamel in blue and varying shades of green. The dial is then baked in a 800°C furnace, cooled and subsequently polished. The route is silvered powder - silver being the choice of metal used in the making of pocket watches of that time. The dial is surrounded by a white ring displaying names of world cities in black and Portsmouth and Port Royal in blue. Skeletonized hands display the time. The GP caliber 033G0 automatic 41mm watch is crafted in 18k white gold. On the rotor, dates of the H4 sea voyage are engraved. The entire movement is visible via a sapphire crystal case back andaffixed to the watch with six screws.
Water resistant to 50 mm and having a power reserve of 46 hours, the 50 pieces limited edition Girard- Perregaux World Timer John Harrison timepiece is a wonderful tribute to a watchmaking genius who struggled to get the recognition he deserved for his great contributions made to timekeeping.

In 2008, I blogged about John Harrison in great detail, based on Dava Sobel's novel, and I am pleased to be able to refer back to the blog ...

Finding a precise timekeeping instrument was a matter of life and death.
Mans struggle to determine longitude spanning four centuries, fueled the inventions of precise timekeepers. Timepieces which lost time, lost men at sea, as they were unable to calculate their location and wandered among invisible lines of longitude weaving in and out of degrees.
The 1600's and 1700's were perilous. Fleets of ships' sent out by hungry sovereigns on world exploration and to trade silks and spices were unable to determine their location. Some found land, some were too late spilling their scurvy riddled sailors onto an

unmarked shore, others wandered aimlessly 20 degrees off coarse, some sunk in dark unforgiving waters. On October 22, 1707, four British Men 'O War sank just off the Cornish Coast. 2000 men were lost. In 1714, The British Parliament , aggravated by this obviously needless catastrophe, passed the Longitude Act: £20,000 or in today's reckoning - £2.87 million would be awarded to anyone who could invent a way to determine the precise longitude of a ship's location to within less than one degree.
Click here to read my post The Longitude Act of 1714. The desperate struggle for precision. An in depth review of Dava Sobel's novel - LONGITUDE
Posted by Vicky Van Halem at 6:33 AM