Richard Mille RM 027 at Only Watch Auction in Monaco 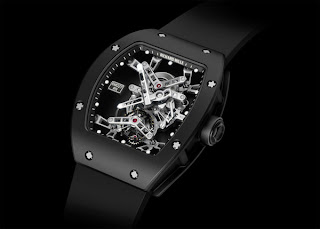 For this years Only Watch Auction,held by Antiquorum once every two years in September at the Monaco Yacht Show to raise charity for the medical research of Duchenne Muscular Dystrophy, Richard Mille is providing it lightest watch crafted with tennis champion Rafael Nadel in mind. The RM 027 weighs just 20 grams and is highly shock absorbant. The efficiency and resiliency of this watch has been tested on numerous occasions, not only in a lab, but also in more naturalistic settings - around the wrist of Rafael Nadel as he plays in tennis matches.

Richard Mille worked in close collaboration with Rafael Nadel while researching and developing the RM027 and wore the watch to training sessions inorder to test its resiliency under impact.

As a rule for most watches, tennis is one of those games, where people take off their watch rather than strapping one on, as the impact of racket to ball causes a sudden jarring of the movement within the case. Most movements cannot withstand the constant impact, and is likely to become damaged; however, Richard Mille has designed this watch with superior shock absorbent able to withstand the jarring effects of the sports.
One must not forget the RM 027 is able to achieve this level of shock absorbency in a watch with a tourbillon complication. In addition this manual winding watch weighs a mere 20 grams. The lightness of the watch ensures Rafael Nadel's game will not be hampered in any way from the added weight of a watch. Rafael Nadel has been wearing this watch on the courts since may 2010, and both player and watch have not wavered in performance.
Rafael Nadel met a 15 year old boy suffering from Duchenne Muscular Dystrophy back in April after the Monte Carlo championships, at which Rafael Nadel boasts the most wins -7 and the most consecutive wins, and handed the lad his watch as a symbolic gesture.
Only 50 limited edition of the RM 027 was made, making the watch highly coveted by collectors who may want to try their hand at a bit of tennis.
Posted by Vicky Van Halem at 6:45 AM