The Zenith Star 159 days in Space 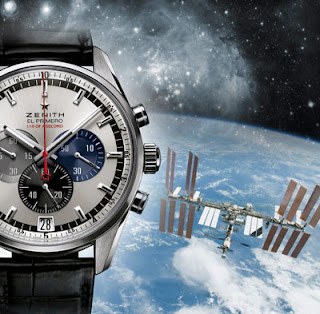 Zenith El Primero Striking 10th had no need for a tourbillon, as in space there is no gravity to hinder the effective precision of a watch; however, it is interesting to discover how Zenith El Primero fared with absolutely no gravity at all. As it turns out, quite well. After 3 planes and 14 Mi-8 helicopters with 7 rescue vehicles located the soyouz spacecraft reentry capsule on the vast steppes of Kazakhastan , after 159 days on the International Space Station ,they found , ESA astronaut Paolo Nespoli and his Zenith El Primero Striking 10th timepiece, along with his Russian and American fellow astronauts , doing just fine.

It is very fitting for the Zenith El Primero Striking 10th, based on the world's first automatic chronograph, to spend time up in space where its founder gazed so many years ago to gain inspiration for its identity.

Georges Favre-Jacot, founder of Zenith in 1865 at just 22, desired to make the best watch movement. To achieve his goal he hired the best watch- makers and designers, placed them all under one roof providing them with adequate lighting and heating, a luxury for most working conditions in those days, and set out to make a superior movement. The movement was made, and George Favre-Jacot was very pleased with the result. However, a watch movement of this quality required a proper name to represent its worth. George Favre-Jacot looked to the heavens, teeming with stars. He riveted his gaze towards a constellation rotating around a pole star, and his mind still intensely focused on his new watch movement, compared the celestial movements to the wheels and pivots turning on their axis. Thus he named the company Zenith, a term from the Celestial Coordinate system -referring to a direction pointing directly "above" a location in space, and as his logo, he chose a star.

Just like its ancestor, the original El Primero movement, which was the first chronograph to beat at a rate of 10 vibrations per second greater than the usual 8 vibrations per second, the Zenith El Primero Striking 10th, has its own horological milestone to flaunt. This Zenith El Primero Striking 10th, which won a best watch award, utilizes a flying seconds hand measuring time in 1/10ths of a second increments. The flying seconds hand going around the dial every second is also known as a "foudroyante" - most "foudroyante measure in 1/8ths of a second, but the zenith tracks seconds to the tenth. The movement supporting the 1/10th of a second flyback column wheel 60 minute chronograph is an in-house Zenith caliber 4057B vibrating at 36,000 vph.

But Zenith has not had enough of space, the company has another plan in the works. Zenith has partnered with Felix Baumgartner, Austrian pilot, champion parachutist and record-setting BASE jumper, in a project named Red Bull Stratos. Felix Baumgartner will jump out of a capsule suspended in the stratosphere - at an altitude of 36.5 km - four times higher than planes fly to beat four world records: highest manned balloon flight; highest leap; longest free fall , an an unprecedented first time ever achievement to break the sound barrier with a human body. Strapped to his hand will be a Zenith timepiece. Zenith being one of the main sponsors of this event, which will result in new research data for the improvement of aerospace safety. If any watch can maintain efficiency and reliability under these unearthly conditions, it will be a Zenith.