The Power of Movado - A Story of Recovery 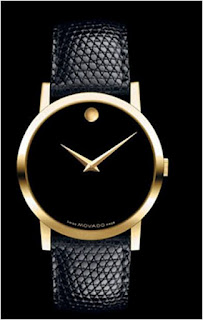 His name is Ken, although he cannot say it. He was a co-worker until a couple of months ago. I saw him an hour before his stroke. He was dropping off a 12 pack of Bounty Towel at the office. He seemed a little tired and stressed. No hint of the huge blood clot building up in his brain. He smiled and bid me farewell. He was always inquiring how I felt or if I had eaten.

Ken was not at work the next day; he was fighting for his life.

Two months later, Ken was still in his coma.  He had overcome a potentially deadly infection and threads of response glimmered behind his closed eyes. A permanent employee had replaced a temporary employee who had replaced Ken. The permanent employee, a corporate fellow in a starched collar and pointed shoes, sorted through Ken's old desk with military precision. The last traces of Ken were being flung into a cardboard office box. I had offered to take the box to his wife.

I heard a clink of glass on the bottom of the filing cabinet beside Ken’s old desk, and the new employee withdrew a watch. I recognized it immediately. The leather black strap was soft and worn and a gold dot clung to the 12 ‘o’clock position amidst a black face. It was a Movado Museum Watch. The employee flung the Movado Watch among Ken's dog-eared odds and ends.

“Hey! That’s Kens,” I said with a protectiveness that surprised me.

I picked up the Watch and held it. I had seen Ken glancing at the Watch on so many occasions that ,to me, the Watch was an intimate extension of him. I felt the new employee had somehow invaded Ken's privacy. I was filled with a sudden urgency to return his Museum Watch. I felt he needed the Watch.

I called his wife, Susan.

“I found Ken’s Watch,” I said knowing how silly it sounded since he was in a coma and in no need of the time.

“Oh!” she said and hesitated. I could hear her throat clogging up. “Come see Ken,” she said after a moment.

She gave me directions. I headed to the hospital immediately after work.

I tiptoed into Ken's room smelling hospital grade antiseptic. The room was dim. I stood by the doorway looking at his still form beneath Hospital blankets. Susan had fallen asleep by his side, her head on her folded arms, resting on the side of his bed. The room was still and I turned to leave.

“She’s asleep got to go.” I thought, feeling guilty but relieved.

Then I felt the cool glass of the Movado Museum Watch against my palm. I squeezed it gently and tapped Susan on the shoulder. She sat up immediately, used to being on the alert.

She held my arm, “You came.” she said, and I cried and she cried.

I stretched out my hand and let the Movado Museum Watch lay flat against my palm. Susan took the watch from my hand and laid it against her cheek as fresh waves of tears rolled down her face. She carefully lifted Ken's wrist and around it she placed the Movado Museum Watch. I thought I saw his fingers move in response, but I was not sure.
Ken struggled up from his coma two weeks later, and it was two weeks after that he started looking at his Watch.
Four months later, Ken cannot walk or talk or feed himself, but every once in a while, he looks at his Movado Museum Watch. A small action powering Susan’s hope that Ken will recover.
Susan believes, the Movado Watch links Ken to his old life, and plays a role in his recovery.
Posted by Vicky Van Halem at 9:34 AM